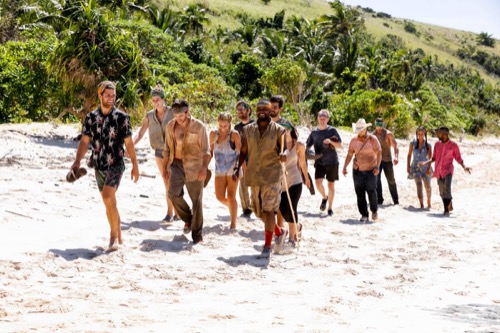 Tonight on CBS Survivor: David VS Goliath airs with an all-new Wednesday, November 07, 2018, Season 37 Episode 7 and we have your Survivor recap below. On tonight’s Survivor season, 37 episode 7 called “There’s Gonna Be Tears Shed”,” as per the CBS synopsis, “Alliances between the “Davids” and “Goliaths” are tested at the merge as some castaways may join forces, and a new unlikely pair may choose to work together.”

The episode begins with the merge, the real game starts now. The tribes have a feast to share with each other. John is excited, everything that he hoped for is on the table, he can replenish and get his strength back. Gabby thinks there will be an immunity idol at the feast, she is keeping an eye out. Angelina finds out about the blindside that got Natalia voted out and knows she has to tread lightly with Alec.

Elizabeth is already getting under everyone’s skin and it looks like she might be the next one going home.

Christian is thrilled that Nick is still in the game, especially since he told him that Dan might have an idol.

Kara reunited with Dan on the beach and he tells her that he found a second idol.

Goliath has the numbers and they plan on getting rid of the Davids one by one.

Mike’s strategy is trying to just stay connected with who he feels connected with. He came over with Nick and wants to work with him, Allison and Alec. Alec is thrilled to be merged and is excited about really playing the game now. Mike tells the group that it might make sense to take out two Davids right away. Nick is thrilled, he is happy to be in the alliance.

Elizabeth knows that Kara and Dan are close and want to get rid of Dan. She starts to talk to Alec and tries to get him on board with her idea. Alec goes right to Karan and Dan and tells them, he has to play double agent as long as he can before he shows his cards.

Time for the first individual Immunity Challenge, tribal immunity is no more. For today’s challenge, they are going to swing a pendulum through a frame and around a statue. If at any point their pendulum stops or their statue falls they are out. The last person left standing wins immunity. In the second phase of the challenge, they have to switch hands and they are easily down to three; Allison, Dan, and Elizabeth. Dan drops his statue, we are down to two. One Goliath and one David, but only one immunity necklace. Elizabeth loses momentum and loses, Allison wins immunity.

The new tribe name is Kalokalo and they have a lot to decide with heading to Tribal Council together. Angelina wants to take out Christian, she likes him but she thinks strategically it would be the best move. Angelia is depending on the other Goliaths to take out Christian. On the other hand, Gabby wants to see Elizabeth leave but knows she has no power and can only hope the target is not on her.

Everybody digested Angelina’s idea of getting rid of Christian and they are against it, they want to get rid of Elizabeth. Angelina’s attitude might just get her voted out if she is not careful.

Angelina meets with Elizabeth in the woods and tells her that the target is on her.

At tribal council, Alec says there are so many conversations going one and everything has shifted. Angelina says that Goliath is taking a more conservative approach and she agrees. Elizabeth says she disagrees, the Goliaths are convincing themselves of this mirage that everything is fine when it is not the reality, there are fractures. Elizabeth tells everyone that Angelina told her that the Goliaths were going to vote her out and it is important for them to know there is a fracture in their group. Angelina tells her that it is a bad strategy to discuss what they talked about. Angelina tries to defend herself, but she is not doing well. Gabby takes Elizabeth’s side, Angelina says that she is just being used. Angelina says she should have just lied. Jeff says that whether she meant it or not, it is what it is. Elizabeth says that Angelina wasn’t truthful. Behind Angelina, the rest of the tribe is whispering and you can see that there just might be a shift in the vote.

Time to read the votes, the first vote is for Angelina, then Elizabeth; and it just continues to vote after vote for Elizabeth and she is voted out.