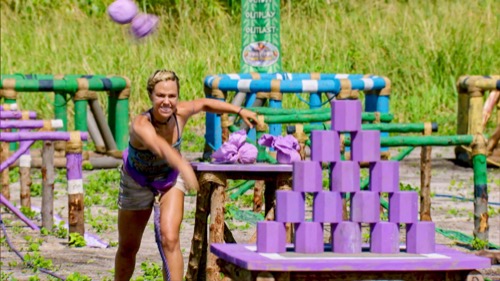 Tonight on CBS Survivor: David VS Goliath airs with an all-new Wednesday, December 12, 2018, Season 37 Episode 13 and we have your Survivor recap below. On tonight’s Survivor season, 37 episode 13 called “Are You Feeling Lucky?,” as per the CBS synopsis, “One castaway will earn a one-in-six chance at the title of Sole Survivor after winning a crucial immunity challenge.”

Everyone congratulated Christian for wisely playing his idol. They thought he must have been suspicious of their behavior and so they had no clue that Davie betrayed them. Davie had been worried about what could happen once Christian was gone. Christian was considered the big baddie for now however that could all change once he was gone and the tribe needed someone else to eliminate. Davie hadn’t wanted to be the next person the rest of them sent home and that’s why he sided with Christian. Christian had seen how easy the rest of them would have been willing to get rid of him and so the only one he trusts is Davie. The two of them knew if they work together that they could eliminate everybody else and so they planned of eliminating Nick first.

Nick didn’t trust Christian and Davie felt threatened by Nick. Nick already had an idol and then went on to fake finding a new idol. What he really did was just pull up the idol he had in his possession as if he just found it and so pretty much everyone thought he had this one idol, but Davie had known about the first one and so he went to think Nick had two idols which wasn’t fair. Davie thought that Nick should be eliminated so that the idols could come back into play and he was willing to betray one of his oldest friends a second time because of this game. Davie only cared about winning and he held onto his emotions as they all went into the Rewards Challenge. The Challenge was another relay race and at the end, Davie proved to be the winner.

Davie could have taken two others with him to a prestigious hotel where they could eat whatever they want and so Davie made his choices based on strategy He chose to take Nick and Kara with him though he upset Angelina in the process. She had won rice for everybody and she thought that they would all repay her for it. When that didn’t matter, she got angry and she was saying a lot of things back at camp about Davie. Davie was manipulative and he didn’t care about alliances. It was all true of course but that’s not why Angelina had said them and so her being angry had been amusing at first until the group came back from their Reward. It turns out Davie used the dinner at the hotel to talk to Kara alone.

Kara was approached about eliminating Nick and she was onboard with it. She was asked to talk to other people she trusted and so she talked to Allison once she got back to the camp. She told her friend how Nick had two idols and Allison had seen him as a threat as well. Allison then went to Mike and the two of them had laughed at how the Davids were picking each other off. They weren’t sure if they were going to eliminate Nick, but he had seemed like the biggest threat and so leaning towards sending him home. And so they were all making plans based on what Davie said, meanwhile he fit the whole part about how he didn’t think Nick got the second idol to himself and went on looking for the idol when everyone else was distracted.

Davie found a clue and it led him to a choice. He had to smash a vase that could either be an idol or it could have prevented him from voting at the next tribal. Davie didn’t know what to do and so he asked God for a sign. God was blowing the fire away from the vases altogether and so Davie thought that was his sign. He decided not to play the game at all and just focus on eliminating Nick. He instead tried to win immunity at the Immunity Challenge. The Challenge was a balancing game. The contestants all had to stand on a perch holding a balancing disc with two balls on it. If one of the balls dropped or they got off the perch, they were out. It was a difficult game to play because it was hard to stop your arm from shaking.

Both Nick and Davie loss that round and so the winner was Mike. Mike won the Immunity Challenge and it made him feel bold. He wanted to eliminate Christian because Christian as the biggest threat yet people were torn between voting out Allison or Nick. Nick himself was still trying to eliminate the Goliaths first and so Mike changed his mind the only way he knew how. He told Nick what Davie was planning and that made Nick want to eliminate Davie. Davie, on the other hand, was beginning to change his mind because he talked to Nick about the idol earlier that day and Nick had been truthful when he said he just had the one idol. So that made Davie realize that he was getting rid of the only person he could trust. He didn’t want to do that for Christian and so he had been about to change his mind.

Now, with everybody knowing about each and every one of the plots, it was hard for Mike to round them up much less talk them into voting out Christian. There was just too much confusion and so both Davie as well as Nick played their idols. They were safe and people voted for either Christian or Allison until the person voted out proved to be Christian.