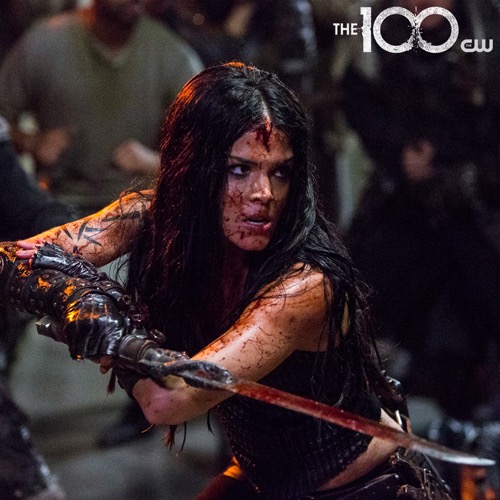 Tonight the CW series The 100 airs with a Tuesday, May 1, 2018 season 5 episode 2 and we have your The 100 recap below. On tonight’s episode called, “Red Queen” as per the CW synopsis, “Octavia is forced to take guidance from an unlikely ally when the future of the bunker and all those inside it is jeopardized.”

46 days after Praimfaya – Octavia is practicing her sword skills when she is called to a council meeting. During the meeting, they hear something. Someone is out there.

Abby thinks she has found Clarke. She and Marcus put their helmets on. They try to push, but the entrance is sealed from above. On the other side, Clark is thrown

Jaha brings Kara in to talk to Octavia and the others. She tells them that they are stuck in the bunker for five years and they don’t have enough food. Kara is mad that Octavia let all of these people in. Kara’s anger builds. Jaha sends her out of the room. Indra thinks they need security on every floor. Octavia declares half rations for everyone.

Everyone is eating. A young boy asks Jaha for more food. Jaha explains that they need to eat less. Marcus offers some of his food, but Jaha tells him it is okay. Kara comes up to Jaha. She has an idea to make the food last. He tells her they can talk tomorrow. Seconds later, Kara is shaking on the floor. A fight breaks out.

Marcus and Abby come to. They are restrained. Kara is behind it. She is angry about the death of her husband. She blames them.

Jaha is reading a story to the young boy when the some of Octavia’s men come in along with Octavia and Indra. There is a fight. They send everyone to the rotunda. They keep Jaha and tell him to get the blueprints.

Jaha looks over the blueprints. He thinks he may be able to get to the generator and use it to short out the locks on the doors. Indra thinks it’s a dangerous idea. Octavia is all for it. They try to make their way to the generator. The others distract several men. Octavia hides on the side of a dark wall with Jaha. He has been stabbed and is bleeding.

Octavia and Jaha work to make their way to the generator. Jaha is becoming weak. He has one wire left to connect to open the door but he knows that the grounders are going to come in and kill everyone. He will only do it if she plans to lead. She agrees.

Marcus tells Abby he saved her because he couldn’t bear to lose her. They here thumping. It grows louder and louder. Octavia tells Indra the door isn’t open yet. It will be but she needs to declare her leadership. She fights more than a dozen men before the people kneel to her. Kara runs. She points a gun at Marcus and Abby before turning it on herself. Octavia throws a knife, stabbing her right in the hand so she cannot pull the trigger.

Abby runs to Jaha. He is hanging on by a thread. He begs Octavia to take care of Ethan. She promises. He asks to be brought to Wells. He breathes his last breath while they watch on and comfort him.

Indra tells Octavia to clean up but Indra’s daughter doesn’t want her too. She is wearing the blood of their enemies, it is her armor. She announces conclave rules and makes the criminals fight. She throws them a sword. Kara slashes through the circle around her.

Octavia sits on a throne, watching everyone fight. The next group of combatants is brought in. Marcus is one of them.