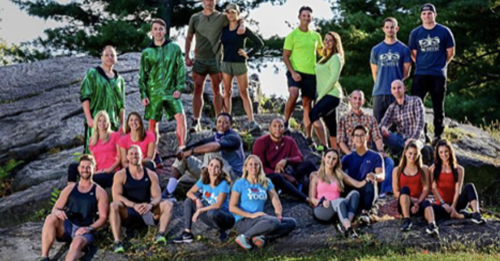 Tonight the CBS series The Amazing Race airs with an all-new Wednesday, January 3, 2018, season 30 episode 1 and we have 1your The Amazing Race recap below. On tonight’s season 30  episode 1 called,“Good Job, Donkey” as per the CBS synopsis, “Season 30 begins in Washington Square Park in New York City. The 11 teams then fly to Iceland, where they must traverse a massive canyon high above the Geitargljufur River.”

Time to start this season, the teams have a plane to catch, but first they have to get their clue and it is in the fountain – time to get wet. A little more about the other contestants; Lucas & Brittany are ocean rescue lifeguards, April & Sarah are goat yoga instructors, Henry & Evan are Yale students, Eric & Daniel are twins and are both firefighter paramedics, Trevor & Chris are violinists. Teams are now making their way to Iceland when they land they must drive themselves to a river canyon waterfall called Geitargljufur and pick up their next clue.

They have to drive in off-road buggies with an expert driver, teams will race back and forth across the river bed as many times as they need to to find letters to spell out INGOLFSTORG, the name of a square in the city. The trick is the numbers of the letters give the correct order of the letters, who will figure it out first?

The biggest problem is that it is hard to see the letters when you keep getting splashed in the face with water. Cody & Jessica are the first team to finish this Roadblock. Next teams must find this strong person who participates in heavy lifting competitions – they must find Katine who will ask them to identify two popular national tonics.

Eric & Daniel are in the last place, they are still dangling high above the canyon. Cody & Jessica arrive at the next place, the two popular drinks are Black Death and Porkskalysi. Cody & Jessica find out what they are, cod liver oil and Brenavin – they have to drink a shot of each and then they are off to the first pit stop and the most northern capital city in the world, REYKJAVIKURTJORN.

The finish is close, April & Sarah are team number ten.

Dessie & Kayla are the last team to arrive and are eliminated from the race.