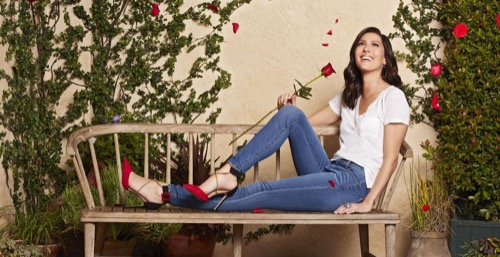 The Bachelorette is back with our new Bachelorette for this season, Becca Kufrin who says that the past year has been hard, she had the highs and the lows, she went through everything and more. Becca won Arie Luyendyk Jr.’s heart last season on The Bachelor and became engaged, then he publicly dumped her and later began dating Lauren Burnham.

After that Becca went back home, she was completely blindsided. Since her dad passed away she has learned that she can be at her lowest or saddest point and still find happiness.

Becca is so happy and confident to be The Bachelorette and is not going to let the heartbreak stop her from getting what she wants.

Becca is back on the ranch and Chris is there to greet her. Becca says she has nerves, she doesn’t want to fall in love again and not have the feelings returned.

Time for the first limo to pull up in the driveway. Colton is first, he starts her off with a bang. Next is Grant, he tells her he gives her a lot of respect for what she just went through. Next is Clay, then Jean who teaches her a little French, Connor gets down on one knee and tells her he is opening his heart to her, Joe says he forgot everything he was going to say to her, John tells her that love can happen over night, Leo has his hear up and pulls it down, Jordan tells her he is already having a great time, Rickey tells her she is gorgeous and sexy, Alex pass through quietly, Nick comes dressed as a race car driver and takes off his suit – he is a lawyer, Mike brings a cut out of Becca’s ex so he can see how happy she is tonight, a mini van pulls up and Garret is there and tells her he can’t wait to be an awesome dad and husband, Blake shows up on an ox, Lincoln brought her a piece of cake for his birthday, Chase tell her the case makes it that much better, Darius comes in quietly and smiling, Ryan comes without his banjo, Christon says he is dying to know about her, Wills says he is a closet nerd, Jason taches Becca a homegrown handshake, Kamil tells her that relationships have to meet half way, Jake tells her she looks so pretty, a hearse pulls up and it is Trent who says he literally died when he heard she was The Bachelorette, Christian twirls her around, David shows up in a chicken costume, Chris tells she is absolutely stunning and he brought some friends – a choir.

Becca is in the house and Connor is the first guy that steals her away for some alone time. Clay takes her next and they spend time making clay figures of each other. Chris plays basketball with Becca. Jean has brought her a bracelet from his home country.

Becca really likes David, he has quite a great personality showing up in a chicken suit.

Chris knows Chase and believes he is not there for the right season because he knows his ex who told Chris that he is just trying to revamping his marketing company.

Chase decides to tell Becca the truth in case it gets around to her. Chase goes to get Chris and asks him to explain the text from Danielle. Its an awkward situation, Chase tells her it was like two years ago and Becca is surprised that Danielle would harbor that much resentment. Chris makes his exit and Chase continues with Becca, he holds her hands and tells her he is there for her. Becca felt the whole situation was strange.

One person raised a red flag with her, Jake who is from her hometown and she wants to know why is there. Becca calls Jake over and asks him right out why he is there. She tells him that she does not feel comfortable with him being there because they have met many times before and he had no interest in her. Becca says she was interested and because he did nothing in the past, she wants to send him home. He tells her that she may be hanging on to a different Jake than who he was a year ago. Becca says its fine, she doesn’t want to waste any other their time and she is sending him home.

Becca goes into the house and explains to the men that she sent Jake home; the guys are shocked.

Becca has no regrets in sending Jake home, she only wants to have men there who are there for the right reasons.

Time for Becca to give out the First Impression Rose, she calls Garrett outside. Becca tells him that he made her laugh and she had such a wonderful night with him. Becca loved that he showed up in the mini van and she felt an immediate connection with him, she kisses him and he is so very excited.

Christ tells the men she has some tough decisions to make and thanks them for a wonderful evening. A lot of the men are heartbroken.

Time for the rose ceremony. Becca tells them all that she is so thankful for them all being there and if they don’t get a rose it is because she has to follow her heart. Roses go to: Lincoln, Blake, Ricky, Jean, Christon, Clay, Wills, Connor, Jason, John, Ryan, Alex, Nick, Trent, Colton, David, Jordon, Leo, Mike. Its the final rose and it goes to Chris R.

Kamil is really embarrassed to be going home, he says he lost to a chicken. Joe says it was hard for him to be comfortable, to be himself. Chase can’t believe that something so small came back to bite him in the butt.