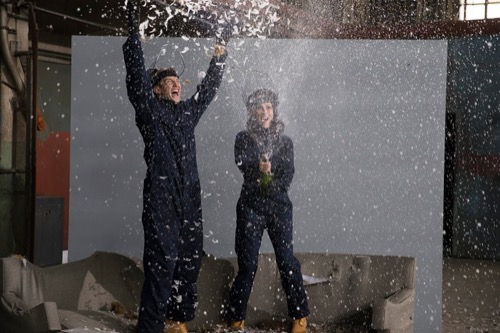 The Bachelorette 2018 airs on ABC this evening with an all-new Monday, June 11, 2018, season 14 episode 3 and we have your weekly The Bachelorette recap below. On tonight’s season 14 episode 2 as per the ABC synopsis, “Becca goes on a spa date with six gentlemen; Chris joins Becca at Capitol Records studios, where they meet Richard Marx; one hopeful bachelor has a freak accident; and a group of men meet Becca at a football field to run drills.”

Becca is worried that Colton is on the show for the wrong reasons, he thinks that Colton was hoping that Bachelor alumnae, Tia Booth was going to be the Bachelorette. The guys arrive at the spa, Becca tells them that instead of getting pampered, they are going to do the pampering. The men are greeted by Becca’s girlfriends who are going to get the pampering. Colton is cringing, he can’t believe Tia is there. The guys head to the locker room to get changed into their outfits. Jason gives Colton advise, tells him to address the elephant in the room with Becca.

Becca and Tia go for a walk to chat in another room about Colton. Tia says they only kissed, there was nothing established. Tia tells Becca she hopes Colton is there fully for her.

It’s time for the evening cocktail with the men. Jordon is confident that he is going to get the rose tonight. Becca spends some time alone with Jason and she tells him that she has a crush on him. Jason leans in for a kiss and things start to sizzle between them. Jordan and David are knocking heads, Jordan doesn’t like the questions he is asked. David reveals to Becca about his 4000 matches on Tinder. Becca confronts Jordan and high fives him on his success when she leaves, Jordan tells David that was a bitch move.

Jordan leaves the room and goes to see Becca, he gives her a hug and it’s awkward. They sit down and he tells her he knows that it is difficult because he is a model, but he looking for someone who is real.

Jordan goes back to the men, David tries to get him going, he keeps poking over and over again.

Becca has to decide who to give the rose to and she is having a hard time. First, she sits down again with Colton and tells him that she spoke to Tia. Colton tells her that he is really there for her and seals it with a kiss. Becca gets up and gets the rose, she gives it to Colton. Becca says goodbye to the men.

Meanwhile, back at the house, there is a date card, it is a one on one for Chris and Becca.

On their date, Chris and Becca head to a music studio and Richard Marx is their playing the piano. Richard and Becca sit by the piano and sing “Right Here Waiting For You.” Richard tells Chris and Becca that he is going to help them write their love song. Chris looks so uncomfortable, Richard tells him he has to be vulnerable. Chris tells Becca it is a tough thing to do, he has a hard time opening up. In the end, Chris does really well, better than Becca and Richard is impressed.

There is a group date card that arrived at the mansion. Jordan confronts Colton about Tia and Colton refuses to answer. David and Colton start arguing again.

Chris goes to see Becca and tells her there was an incident at the house the evening before, he is in intensive care – he says he fell out of bed and landed on his face.

Meanwhile, Jordan says it was karma.

The guys arrive for their group date, there are ten of them. Becca says she loves football and brought to women from the NFL to play with them. The competition is on, the guys are going to play a full game of football. The last play of the game and Clay takes it a little serious and hurts his wrist.

Time for the group date cocktail, Clay is still at the hospital. Becca tells the guys that she really liked the game. Garrett gets alone time with Becca and steals a kiss. Blake is having a hard time sharing Becca with other guys, he finds it tough. Becca gets alone time with Blake and he calls her his girlfriend, they start kissing and she feels giddy. All of a sudden, Clay is back in a sling. Becca sits down with the guys and tells them that this has been her favorite group date, then she gets up and gives Clay the rose.

Time for the Rose Ceremony. Clay has a tough decision to make, he needs surgery and if he doesn’t get it may affect his football career, although if he does leave, he has to leave the show. Clay gives her back his rose and leaves.