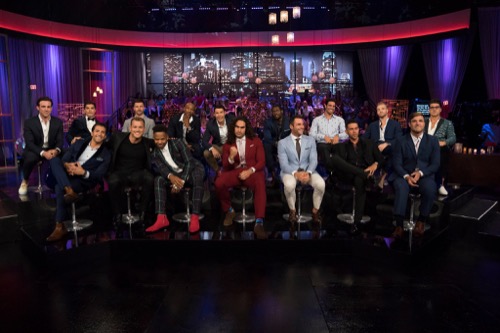 The Bachelorette 2018 airs on ABC this evening with an all-new Monday, July 30, 2018, season 14 special episode and we have your weekly The Bachelorette recap below. On tonight’s season, 14 “The Men Tell All,” as per the ABC synopsis, “The most memorable bachelors from this season return to confront each other and Becca one last time to dish the dirt, tell their side of the story and share their emotional departures. Finally, as the clock ticks down on Becca’s journey to find love, a special sneak peek of her dramatic final week with Blake and Garrett is highlighted.”

Chris Harrison welcomes the audience to an exciting night where the men tell all. Jordan and David are here as well as Colton, Jason, Chris and more. Chris shows the crowd a trailer of what is to come in Bachelor in Paradise set to debut August 7.

The men are all introduced. Chris asks Jason first about how he felt the first night he met Becca. Jason was blown away by her beauty. Chris shows a clip of the first few days as they all fight for Becca’s heart. Colton and Jordan argue about Colton’s love life with Tia. Jordan shows off his gold underwear. David exposes Jordan for what he is to Becca. Jordan gets angry. The crowd goes wild after looking at the past clip.

Chris wants Chris R. to talk about how angry he was because he didn’t get enough time with Becca. Chris R. admits he lost control. All the guys jump in to tell Chris R. he should have been more patient.

Chris asks Jean about how he could tell Becca he loved her and then take it back. All the guys jump in. He ruined it for them. Jason demands he apologize.

Colton and Jordan go at it, calling each other hypocrites. Jordan wants to know why Colton had Tia waiting around for him. Colton thinks he needs to mind his own business. Jordan thinks none of them know how to find fun. David jumps in. He thinks Jordan was irritated because he didn’t take anything seriously. He wishes he himself would have spent more time on Becca and didn’t worry about Jordan. Jason thinks he preyed on Jordan. David admits he took it too far.

Jordan gets into an argument with a bachelor in the back who was dropped on night one. The bachelor tells them he is a premier banker but models for fun on the side, poking fun at Jordan. Jordan gets angry and tells them all to f*ck off.

Chris calls Jordan down to sit with him to take a closer look at his journey on the show. Chris shows a clip of Jordan first meeting Becca. Becca talks in the clip about Jordan being unique and interesting. In the end, she doesn’t give him a rose.

Jordan tells Chris he likes to have a good time. He is confident. If they cannot handle it then oh well. He is going to do what he wants. He doesn’t know why he bothers everyone. He is, in fact, wearing the gold underwear right now. He shows the crowd.

Chris calls Grocery Store Joe down. He only lasted one night but people fell in love with him. Chris shows his quick clip. Chris cannot believe how much he resonated with the viewers. Joe thought his experience was horrible but he smiles about all of the tweets sending him love. He didn’t expect the positive attention. It went well after he left. He shares that he will be on the Bachelor of Paradise.

Wills sits with Chris. Things for going great for him and Becca until the Bahamas. Chris shows clips of his and Becca’s journey. He really cared for her. He was falling for her. In the clip, Becca doesn’t give him a rose and he leaves in the end very upset. Wills admits the clip is hard to watch. It hurt. He really loved Becca. After the show he went home upset and just had to be around people who love him. Chris talks about his fashion sense. He likes to try new things. The audience claps at his style.

Chris asks Colton to talk about his time on the show. First he shows a clip. Looking at the clip, Colton was surprised that he went home after the hometowns. He was in love with her. He knew it was tough on her because of his history with Tia. Sharing that he is a virgin is one of the hardest things he has had to do. He gets choked up. It is hard to hear jabs that he is less of a man. Jordan tells him he respects him for his truth. Chris thanks him for sharing.

Chris calls Jason up next. His connection with Becca came later but it was an amazing love affair that went south. Chris shows a clip of Becca meeting Jason and their journey. At the end of the clip Jason is tearing up. He really fell for her and they connected on all levels.

Jason is glad Becca got closure and that was enough for him in regards to closure. Chris jokes about how he was called one of the best kissers by Becca. He laughs. She never forgot his name after they kissed.

Chris welcomes Becca out to the stage. She takes a sit commenting that they all look great. This is a little nerve wracking for her. She admits her goodbye with Jason was upsetting. He asks her what he did wrong. She tells him nothing it all comes down to heart. They hug. Colton thinks they are all happy to see her happy. Becca talks about Tia. She didn’t make or break Becca’s decision. She also was not affected by the news that Colton was a virgin.

Wills addresses Becca. She healed him in a way he didn’t expect. He asks her what went wrong. Again, she tells him it was all about her hurt.

Jean has something bad to say about Becca. He wants to come up. He hugs her and then apologizes to her for backpedaling. She accepts. He gives her a gift of perfume. All of the guys snicker.

Becca jokes with Jordan. She never knew what he was going to say. Chris R. apologizes for being a jerk and acting entitled throughout his time on the show. He welcomes out a choir to sing his apologies and how he was a jerk. Everyone laughs and then applauds. Becca accepts his apology.

Chris shows the blooper reel from the season. They all agree they had a great time. Chris bids goodnight to all while Becca hugs all of the guys’ goodbye.