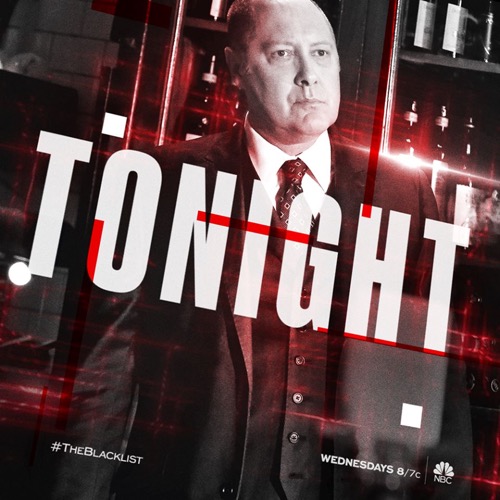 Tonight on NBC their hit drama The Blacklist starring James Spader airs with an all-new Wednesday, February 28, 2018, episode and we have your The Blacklist recap below. On tonight’s Blacklist Season 5 episode 14 called, “Mr. Raleigh Sinclair III”,  as per the ABC synopsis, “Red assists the Task Force in tracking a mysterious Blacklister who carefully develops airtight alibis for murderous clients. Meanwhile, Liz’s reinstatement at the FBI hinges on an evaluation with a psychotherapist.”

A man named Raleigh Sinclair meets another man named Brian in the park. Brian has nothing but rage for his wife who has been cheating on him. Raleigh tells him to hold on to that rage.

Liz and Red talk about therapy. Red finds it enlightening. After, Red meets with an agent to discuss a murder suspect by the name of Marco. He believes that Marco is innocent and it is the work of a man known as The Alibi, who Red thinks is also behind 2 other murders.

Harold and the team begin to look into the three murder cases. Meanwhile, Sinclair is in his lab trying to make a man look like Brian. When the man opens a file he shouldn’t with information about Brian, Sinclair shoots him.

Harold calls Red in. He tells Red he needs to stop helping Liz look for the killer of her husband. Liz is with her therapist. They discuss how her daughter has been staying with her mother until she finds closure. Her therapist also wants to discuss Red.

Red heads to a local shelter. He meets with a woman named Marney who he asks for help from. He wants her to look for a homeless man who is connected to the murdered three.

Brian is running the city streets on a jog. He meets with Sinclair who tells him he needs to make sure people see him. Brian is sick of doing this.

Marney has a lead for Red. Red talks to the woman and makes plans to meet her tomorrow night.

Liz meets with Red. She needs him to go to therapy so she can get her badge back.

Red meets with Liz’s therapist. Red thinks that Liz needs to be judged by her own merits and not his. If they look hard enough they will realize she is everything he is not.

Sinclair walks up to a man on a job site. They talk in the car. Sinclair proposes a job for him, to make him look different. After, he only needs to go for a jog and bee seen by others. He cannot tell him any more than that and he will pay him a large sum of money.

Harold is updated by the team on what they have found out about The Alibi. Meanwhile, Red meets with the woman who Marney connected him with. She tells Red that her homeless friend left with a man in a fancy car. He asks her to look through a book of photos and point to the man. She points to a picture of Sinclair.

Red goes to Sinclair’s lab and finds dozens of facial casts. The team moves on and looks around. They think they have found a face of Sinclair’s next victim but they cannot find the file. Red has it and he doesn’t want to share it with them.

Liz’s therapist wants to know who Liz is in her own words and what type of closure she wants. She won’t reinstate her until she can profile herself.

Sinclair brings Brian to meet his doppelganger. He tells the two they need to go over what he has planned.

Brian seeks out his ex in a parking garage. He shows her a gun and tells her that he really isn’t in front of her right now. He is in the city jogging. He chases after her and shoots, hitting her in the arm. Just as he finds her between two cars and is about to shoot, the team shows up. He runs but is hit by the police car.

Sinclair meets with the jogger. He is about to give him his payment. He has a gun. Red stops him, getting into the back of his car. He tells the doppelganger to get out. He tells Sinclair they are going for a drive.

Red brings him to a secluded place and tells him he knows all about his OCD and his ability to put a man in two locations at once. He compliments Sinclair before asking him about three murders. Red tells Sinclair that the FBI is looking for him but he can save him as long as he does what Red asks him to.

Liz comes home to find Dembe in her apartment. She starts to call the police but Dembe thinks they need to work together to get the answers they are both looking for. Liz hangs up the phone. They need to trust one another, Liz tells him.

Red brings Harold a list of 27 killers who Sinclair worked. He let Sinclair go but now they can put all of these men away. Red wants the body of one of the doppelgangers, he wants to give him a proper burial. Later, Red watches as the doppelganger is laid to rest while the woman who helped him from the shelter stands by his coffin. Red gets out of the car and consoles her.

Liz meets with her therapist and demands she be reinstated. She has already come to terms with Red as her father. She doesn’t need to work on anything. She knows that Red has done good and bad.