BY hellodrdavis on September 25, 2018 | Comments: 2 comments
Related : Soap Opera, Spoiler, Television, The Bold and the Beautiful 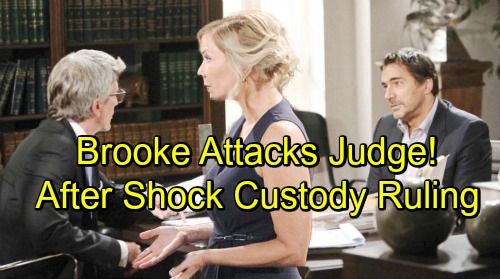 The Bold and the Beautiful spoilers tease that Brooke (Katherine Kelly Lang) will have a major confrontation and make some stunning accusations. Brooke has come down squarely on Bill’s (Don Diamont) side in the custody dispute over Will (Finnegan George). She doesn’t approve of Katie’s (Heather Tom) decision to seek full custody, and she’s tried to help Bill as much as possible.

Of course, there’s only so much Brooke can do. She tried talking to Katie to get her to rethink going ahead with her petition, but Katie wouldn’t budge and the case is going forward. What Brooke doesn’t know is that Ridge (Thorsten Kaye) is an old friend of Judge McMullen (Joe Lando), who will be presiding over the case, and that Ridge has been pressuring the judge to rule in favor of Katie.

The case itself will be rocky. Each side will present their evidence and witnesses, and B&B spoilers say that Bill’s misdeeds will be used against him in court, which won’t look good for him. But Bill will generate a surprise witness of his own that will help his side of the case.

Exactly who Judge McMullen will rule for remains to be seen, but B&B spoilers indicate that Brooke will confront the judge after his ruling, which strongly suggests that his ruling will be in favor of Katie. Brooke may feel that the ruling was unfair and baseless, or she might just suspect foul play.

Perhaps Brooke will catch a knowing look between Judge McMullen and Ridge, or maybe she’ll suddenly recognize the judge’s name from a prior off-screen conversation with Ridge. Whatever the case, something will prompt Brooke to confront the judge. Will she put two and two together and figure out that Ridge may have influenced the judge’s ruling?

If she does, she could really cause big trouble for Judge McMullen, not to mention legal trouble for Ridge. Plus, it’s pretty safe to say that her marriage with Ridge would take a big hit. Brooke’s pretty persistent, so chances are she’ll get to the bottom of this scandal.

Do you think Brooke will figure out that Ridge pressured the judge? Stay tuned to the CBS soap and don’t forget to check CDL often for the latest Bold and the Beautiful spoilers, updates, and news.