The Bold and the Beautiful Spoilers: Bill Angrily Confronts Katie – Ridge Intervenes, Faces Off With Bill 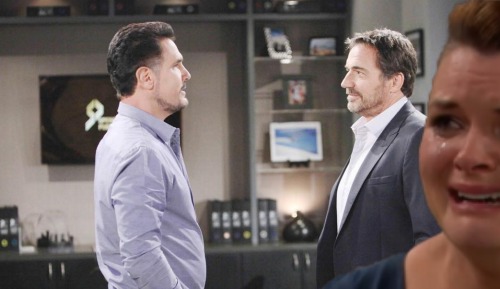 The Bold and the Beautiful spoilers tease that Bill (Don Diamont) will reach his limits when it comes to the custody dispute with Katie (Heather Tom). Bill has been pleading with Katie to not seek sole custody of Will (Finnegan George) for some time now, but Katie has gone ahead with her plan.

There’s one thing about Katie’s decision to seek full custody that really irks Bill. He perceives the entire suit to be driven entirely by Thorne (Ingo Rademacher). In his heart, he doesn’t believe that Katie ever would have considered going after full custody if it weren’t for Thorne’s influence. And Thorne being a Forrester makes it even worse.

But Bill is soon going to learn that Katie has more than just Thorne in her corner…she’s got Ridge (Thorsten Kaye), too. B&B spoilers say that Bill will confront Katie about her decision to file for sole custody as well as her engagement to Thorne. And chances are, the confrontation won’t be pretty.

Bill has softly threatened Katie in the past, promising to bring up her past alcoholism and its effect on Will when he was younger. But this time, it looks like Bill will really lash out and get in Katie’s face. And it looks like Thorne won’t be around to intervene, but Ridge will be.

B&B spoilers say that Ridge will step in on Katie’s behalf, and that Ridge and Bill will face off. And if Bill wasn’t already enraged, he surely will be when this confrontation is over. He’ll probably realize exactly what’s going on…that Ridge is backing Katie to get payback on him for what he did to Steffy (Jacqueline MacInnes Wood).

It all promises to be an ugly scene, and when it’s all over, both Bill and Ridge will probably be polarized and ready to fight harder for their respective sides. B&B spoilers say that Ridge’s next move will be to appeal to the judge who will preside over the custody hearing. But Bill’s next move is unclear. It’s bound to be a doozy, though.

What do you think Bill’s next move will be? Stay tuned to the CBS soap and don’t forget to check CDL often for the latest Bold and the Beautiful spoilers, updates, and news.