The Bold and the Beautiful Spoilers: Bill Begs Steffy to Run Away with Him – Steffy’s Rejection Forces Paternity Test Tampering

BY Kinsley Goldman on May 2, 2018 | Comments: one comment
Related : Soap Opera, Spoiler, Television, The Bold and the Beautiful 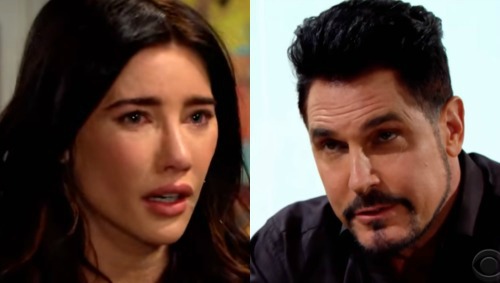 The Bold and the Beautiful (B&B) spoilers tease that Bill (Don Diamont) will take advantage of Steffy’s (Jacqueline MacInnes Wood) heartache. After Liam (Scott Clifton) turns his back on Steffy, she’ll be a real mess. Her dreams were about to come true, but she’ll soon be living a nightmare instead. Watching Liam move on with Hope (Annika Noelle) will hurt Steffy in the worst way possible.

Of course, that’s exactly what Bill has in mind. The Bold and the Beautiful spoilers say Bill will swoop in and offer to save Steffy from this life of pain. He’ll probably suggest that Liam’s rejection just proves he’s not good enough for her. Bill may argue that unlike Liam, he’ll never judge Steffy or hold past mistakes against her. He’ll promise to cherish every moment with Steffy if she’ll let him.

B&B spoilers state that Bill will have a big request for Steffy. He’ll make his pitch and hope that Steffy will agree to run away with him. Bill undoubtedly has a couple of goals here. For starters, he’d love to have Steffy all to himself on his yacht and eventually an island somewhere. That surely sounds like pure paradise to Bill.

Another goal would be to keep Steffy away from Liam and Wyatt (Darin Brooks). He won’t want Liam to waffle again and he certainly won’t want Wyatt to figure out he was wrong. Bill’s plot hinges on Wyatt’s false assumptions. Running away with Steffy would prevent her from clearing anything up.

Naturally, Steffy will shut down Bill’s grand plan. She’ll be too heartbroken to think about any man except Liam. Steffy will still hope to win Liam back, so she obviously won’t want to run away with his father. That’d feed right into Bill’s scheme and make Liam think Wyatt was right.

The Bold and the Beautiful spoilers say Bill will plead with Steffy to reconsider, but she’ll stand her ground. It sounds like Bill will have to switch to some new strategies. He may play the waiting game for a while and count on Liam growing more attached to Hope. If Wyatt learns the truth, Bill may also have to blackmail him into keeping his mouth shut.

Finally, Bill could bribe or intimidate his way into a bogus paternity error. That would sever Steffy and Liam’s last link. Bill definitely has more manipulation in store, but how far will he go to pull Steffy toward him? We’ll give you updates as other B&B news comes in. Stay tuned to the CBS soap and don’t forget to check CDL often for the latest Bold and the Beautiful spoilers, updates, and news.