BY Marcy Cohen on June 12, 2018 | Comments: one comment
Related : Soap Opera, Spoiler, Television, The Bold and the Beautiful, Uncategorized 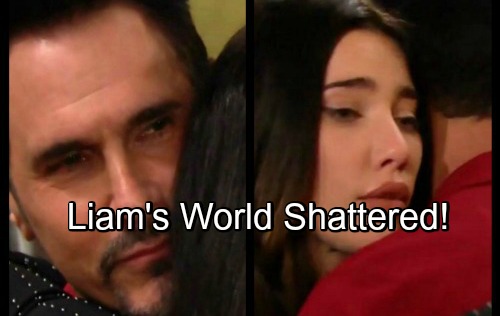 The Bold and the Beautiful (B&B) spoilers reveal that Liam (Scott Clifton) and Steffy (Jacqueline MacInnes Wood) will delight in their reunion. Things are on solid ground again, so they’re looking forward to the next chapter. It won’t be long until Liam and Steffy are planning their nuptials. They’ll be excited about tying the knot again, but their big day could hit a huge snag.

B&B fans can expect some trouble soon enough. Will Bill (Don Diamont) have a hand in it? Next week, June 18-22, The Bold and the Beautiful spoilers say a blackmail plot will ruin a happy occasion. It’s possible it’ll be an engagement party or even a wedding that Steffy and Liam have thrown together. Blackmail is practically Bill’s middle name, so he’d have no problem throwing “Steam” this curveball.

If that’s the case, what will this scheme entail? There’s a chance that Bill will threaten to squeal on Taylor (Hunter Tylo). He might suggest that if Steffy doesn’t cooperate, he’ll have her mother thrown behind bars for attempted murder.

However, there could be some flaws with that plan. Steffy’s dreams are finally coming true and it’s tough to imagine Taylor standing in the way of that. Likewise, would Steffy really give everything up for her mom? After all, Taylor’s guilty of the crime. It’s not Steffy’s fault that Taylor pumped a bullet in Bill. She shouldn’t have to suffer because of her mom’s stupid move.

With that in mind, maybe this blackmail plot will involve something else. Bill needs ammo that could truly pose a threat to the wedding. What’s the one thing that might convince Steffy to dump Liam and possibly even reunite with Bill? A paternity shocker!

Bill was spotted near the lab right after the results were revealed. Many B&B viewers thought it was suspicious at the time. Could Bill have bribed or threatened a lab tech? Is Kelly actually Bill’s child? That’d be a big twist and it could certainly put “Steam’s” future in jeopardy.

Steffy can see how much Liam loves being a dad. The thought of taking that away from him would be brutal. What if Bill promises to keep his mouth shut in exchange for a reunion? In other words, Liam would never find out Kelly isn’t his biological daughter and Bill would get Steffy as his prize.

Steffy might be willing to go along with that for Liam’s sake. She’d want to spare him the pain of losing Kelly to his father. Has Bill been saving this as his last resort? Will this be Steffy and Liam’s next obstacle? We’ll give you updates as other Bold and the Beautiful news comes in. Stick with the CBS soap and don’t forget to check CDL often for the latest Bold and the Beautiful spoilers, updates and news.