The Bold and the Beautiful Spoilers: Bill Explodes As Wyatt Resigns From Spencer – Yet Another Crushing Loss 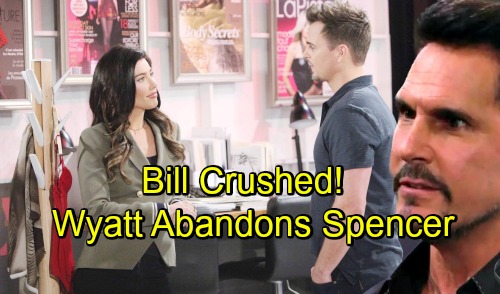 The Bold and the Beautiful spoilers tease that Wyatt (Darin Brooks) will soon come to terms with a disturbing reality. So far, he’s been over-the-top happy about his new job at Forrester. He’s the new Social Media Manager, which is a great new gig for him. He’ll get to excel at something he’s good at, plus he’ll get to work side-by-side with Sally (Courtney Hope) every day. It’s a pretty good deal.

But there’s one aspect of the situation that Wyatt didn’t consider in all of his excitement about the new job, and that’s how Bill (Don Diamont) will react when he hears the news. Wyatt previously worked for his dad, and things didn’t end on the best terms, with Bill essentially throwing Wyatt out after Wyatt told Liam (Scott Clifton) the truth about how Bill lied and manipulated to keep Liam and Steffy (Jacqueline MacInnes Wood) apart.

Despite how Bill and Wyatt’s professional relationship ended, Wyatt knows that his dad will be hurt that Wyatt won’t be returning to Spencer, especially now that Bill has lost custody of Will (Finnegan George). Bill has lost a lot lately, and this will be yet another crushing blow.

But Wyatt will summon the courage to talk to his dad about the situation, and he’ll lay the news on Bill that he’s officially resigning from Spencer and going to work at Forrester. B&B spoilers say that Bill will have the predicted reaction – he’ll freak out. Of course, he’ll be upset to learn that Wyatt is moving on someplace new, and he’ll be really irked that the somewhere new is Forrester.

Wyatt will stand firm, though, and he’ll tell Bill that this new opportunity is important to him, and that he wants his father’s support. It’s not out of the realm of possibility that Wyatt may come back to Spencer someday, but the timing would have to be right, and it’s just too soon for him to be working with Bill right now. He’ll try to show Bill that he’s not deserting him; he’s just seizing a good opportunity right now.

Bill will probably try to be happy for Wyatt, but it will be hard for him to do so. He’ll probably brood about it for a while and complain to Justin (Aaron D. Spears) that both Liam and Wyatt have left him to go work at Forrester. But Bill will just have to live with it for the time being. After all, if it weren’t for Bill’s horrendous actions, both Liam and Wyatt would never have left Spencer in the first place.

Do you think Wyatt will ever feel comfortable working with Bill again, after all they’ve been through? Stay tuned to the CBS soap and don’t forget to check CDL often for the latest Bold and the Beautiful spoilers, updates, and news.