The Bold and the Beautiful Spoilers: Bill Plots Liam and Steffy’s Reunion – Hope’s a Victim as Remorseful Dad Fixes His Mess 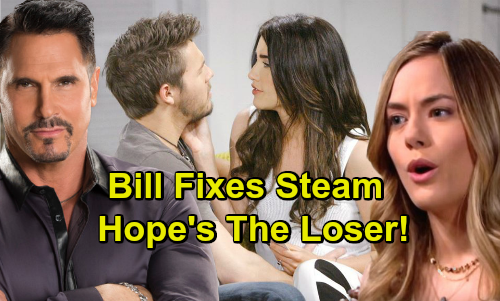 The Bold and the Beautiful (B&B) spoilers tease that Bill (Don Diamont) will try to stay on his new path. He’s finally realized that actions have consequences, so he’s working on being a better man. Bill wants to be the kind of father his sons can be proud of. He certainly views Liam as a good role model for Kelly, so he wants to set a similar example for Will (Finnegan George).

Liam and Bill recently shared some sweet family moments. They’re truly on the verge of repairing their shattered bond. Redemption finally seems possible for Bill, but we all know he’ll never turn from his wicked ways completely. B&B has to have at least a couple characters who are willing to shake things up!

As a result, they may have Bill manipulate for a good cause. In the past, his schemes usually involved a selfish motive. When Bill wanted something, he did whatever he had to do to get it. Next time, maybe Bill will have someone else on his mind when he plots. He could still form a devious plan, but he could at least have a more helpful goal.

Let’s consider how this Bold and the Beautiful storyline might play out. When Bill held Kelly in his arms, he looked in her eyes and was reminded of all her parents’ great qualities. We know that Bill would love to undo some of the damage he caused. Could Bill decide to put Liam and Steffy’s family back together? He might want Kelly to have her mom and dad under the same roof.

All the custody drama with Will could feed this desire. Bill can’t fix his own broken home, but he might try to fix another one – the one he broke in the first place! Of course, any good scheme’s going to have a victim or two. In this case, that’d be Hope (Annika Noelle) and her baby. Bill would have to break up the “Lope” family to mend the “Steam” unit, but that might be something he’s OK with.

Since Bill and Brooke (Katherine Kelly Lang) are moving into tempting territory, they’ll need some obstacles as well. Bill’s plan to reunite Steffy and Liam could be what blows up “Brill’s” chances. Do you think Bill will push Liam and Steffy back in each other’s orbit? Will he be the reason “Lope” falls apart?