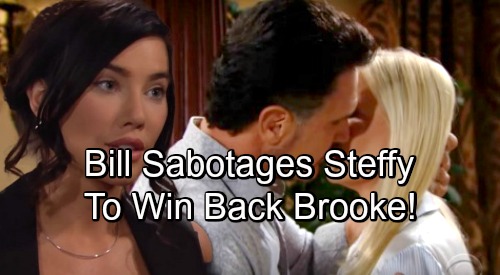 The Bold and the Beautiful (B&B) spoilers tease that Bill (Don Diamont) will continue to lean on Brooke (Katherine Kelly Lang). He’s thrilled to have her in his corner right now, but it’s not just about having someone who can help with the custody fight. Bill still cares about Brooke a great deal, so that’s sure to be an important part of this storyline. It seems B&B’s prepping for a “Brill” reunion.

The timing’s right since Brooke and Ridge (Thorsten Kaye) are having so many problems. Of course, those problems all stem from one major issue: their dueling daughters. Steffy (Jacqueline MacInnes Wood) and Hope’s (Annika Noelle) battle for Liam’s (Scott Clifton) heart was certainly a source of contention. Now their lines at Forrester Creations have led to “Bridge” conflict.

As Hope and Steffy’s war heats up, Brooke and Ridge may drift further apart. That’ll leave the door wide open for Bill to make his move. That could happen even sooner than B&B fans anticipate. The Bold and the Beautiful spoilers say Bill could show some interest next week. It may not be a blatant attempt to get back together, but it’ll be enough to strengthen his bond with Brooke.

If Bill wins the custody case, he’ll have Brooke to thank for it. If he loses, Bill can cry on Brooke’s shoulder. Either way, Bill will probably find himself on a mission to win Brooke over. He clearly likes the chase and with Brooke as his target, it won’t be that hard! Brooke is almost as fickle as Bill is, so they’re really the perfect pair.

Naturally, one good favor deserves another. Will Bill try to repay Brooke by helping out Hope? Brooke may not be opposed to a little Steffy sabotage. Bill’s a resourceful man, so he could undoubtedly make it happen. There’s even a chance Bill could pull some funny business with the shares. Some legal loophole might allow him to get them back.

If not, there must be some other way for Bill to take Steffy down. He claims he’s sorry he pursued her so hard, but the rejection still had to sting. Besides, Bill tends to have tunnel vision when it comes to women. Once he finds one he wants, everything else becomes insignificant. Bill’s usually willing to do whatever it takes to be with the love interest he desires.