The Bold and the Beautiful Spoilers: Bill Rejected By Will – Pays Dearly For Neglecting His Son

BY hellodrdavis on August 13, 2018 | Comments: 2 comments
Related : Soap Opera, Spoiler, Television, The Bold and the Beautiful 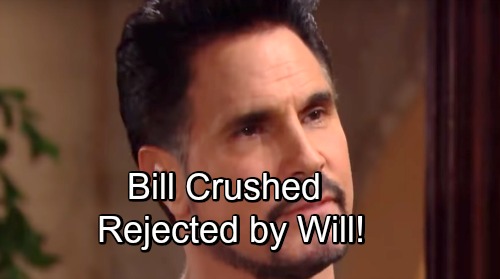 The Bold and the Beautiful (B&B) spoilers tease that Bill (Don Diamont) is in for a rude awakening. After months of obsessing over Steffy (Jaqueline MacInnes Wood) and alienating Liam (Scott Clifton) and Wyatt (Darin Brooks), Bill’s going to feel that it’s time to spend time with his other son, Will (Finnegan George). And it’s about time.

As Liam recently pointed out, it’s been quite a while since Bill paid any attention whatsoever to Will. Katie (Heather Tom) has basically been raising Will on her own. Of course, Bill pays generous child support, but Katie’s actually been the one nurturing Will and acting as a hands-on parent. Thorne’s (Ingo Rademacher) also been spending a lot of time with Will now that he and Katie are an item.

But now Bill is going to come back into Will’s orbit. Bill has been doing some soul-searching lately, and he’s probably doing some inventory on his merits as a father. He basically destroyed his relationship with his adult sons, so he may decide that he wants to do things right from the get-go with Will.

The problem? Will may not be so thrilled to welcome his doting father back with open arms. B&B spoilers say that Bill will keep an eye on Will while Katie is on a date with Thorne, but Will is going to shrug off Bill’s attempt to connect with him. Perhaps Will would rather spend time with Thorne (ouch).

Will likely won’t have overtly negative feelings toward his father; he probably just won’t be used to seeing him and may not know how to respond. He’s been interacting with other adults lately, and it will probably take some time for him to build a close relationship with Bill.

Still, Will’s rejection will surely hurt Bill. And when Bill’s hurt, he usually acts out in unpleasant ways. B&B spoilers say that tension will brew between Katie, Bill, and Thorne over Bill’s role in Will’s life. It will take some adjustment on everyone’s part.

Do you think that Bill will be able to forge a meaningful relationship with Will? Stay tuned to the CBS soap and don’t forget to check CDL often for the latest Bold and the Beautiful spoilers, updates, and news.