The Bold and the Beautiful Spoilers: Bill Takes His Chance with Steffy – Insists Liam’s Loss Is Their Gain

BY Kinsley Goldman on January 13, 2018 | Comments: one comment
Related : Soap Opera, Spoiler, Television, The Bold and the Beautiful 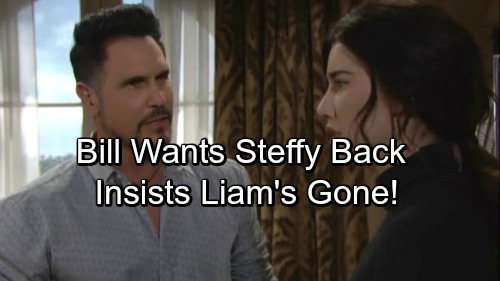 The Bold and the Beautiful (B&B) spoilers tease that Bill (Don Diamont) will feel like he needs to do something drastic. Liam (Scott Clifton) and Steffy’s (Jacqueline MacInnes Wood) marriage is crumbling and Bill’s a big reason why. He’ll struggle with some serious guilt over the next few episodes. Bill will soon make a major decision that catches everyone off guard.

It looks like Ridge (Thorsten Kaye) will take the opportunity to gloat over his engagement to Brooke (Katherine Kelly Lang). The Bold and the Beautiful spoilers hint that Brooke will pay Bill a visit, too. They’ll both be stunned by Bill’s announcement. Once Justin (Aaron D. Spears) hears the news, he’ll also be thrown for a loop.

What does Bill have in mind? Does he intend to move away for a while? Bill might think it’ll help Liam and Steffy if he’s out of the picture. He’ll do his best to put them first. Brooke and Ridge will try to figure out what’s up with Bill these days. They’ll sense that Bill’s hiding something.

Ridge and Brooke will discover the truth eventually, but let’s focus on Bill for now. B&B spoilers reveal that Justin will have some advice for his boss. He’ll contend that Bill may be making another mistake. Since Liam and Steffy’s relationship is over anyway, Justin may think Bill should take advantage of that. He could argue that Bill might as well make lemonade out of lemons.

Justin might push Bill to stick around and pursue Steffy again. He may contend that she’ll be more open to the idea once Liam dumps her. The Bold and the Beautiful spoilers say Bill will dismiss the suggestion initially, but he’ll let himself consider it later. He’ll wonder if maybe he’s given up too easily.

Liam may never forgive Bill, so he may think there’s no point in denying what he wants. Will Bill make his move? Will Steffy once again be vulnerable enough to go for it? Could they have a future together after all? We’ll give you updates as other B&B details emerge. Stick with the CBS soap and don’t forget to check CDL often for the latest Bold and the Beautiful spoilers, updates and news.