The Bold and the Beautiful Spoilers: Bill’s Enemies Come Together, Join Forces To End His Reign of Terror

BY Sean O'Brien on June 26, 2018 | Comments: one comment
Related : Soap Opera, Spoiler, Television, The Bold and the Beautiful 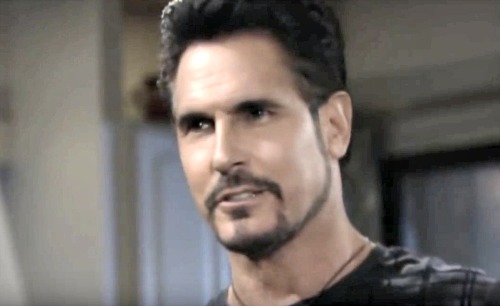 The Bold and the Beautiful (B&B) spoilers tease that the contrast between Bill (Don Diamont) and his sons couldn’t be more apparent. This week, Wyatt (Darin Brooks) asked Eric (John McCook) to help Sally (Courtney Hope). Meanwhile, Bill spoke with Brooke (Katherine Kelly Lang) about the need to split Steam.

Wyatt took Sally into his home, well, it’s technically his dad’s home, but let’s keep going. So, Wyatt happened upon Sally at a local bar because B&B wanted to revive her firebrand character. They later made their way back to his abode, smooched, and are apparently now together.

Bye, bye Katie (Heather Tom), which is basically what Wyatt’s glam-on to Sally means. Hey, Watie opted to split because each half didn’t have the stomach to fight Bill. Katie retained the right to keep Will (Zane Alexander Achor), while Wyatt lost everything, except his aforementioned house (for now).

As for Sally, her character’s history is as colorful as her often-mentioned hair. But this woman has moxie. She’s not a complete crook, as Bill’s past intimidation made her seem. That’s why Eric and Quinn (Rena Sofer) didn’t fully reject Wyatt’s suggestion that Forrester offer Sally an opportunity to use her talent at the fashion company.

Meanwhile, off in the gutter is Bill. He has the bile to show up at Brooke’s home and imply that he’s on Lope’s side. How outrageous, plus he fully well knows that his recent ex-wife is fully aware that Bill has a fixation for Steffy (Jacqueline MacInnes Wood).

So, why the comparison and contrast between Bill and Wyatt? Well, just consider the striking difference between good and bad.

Wyatt is single and wants to start a relationship with Sally. Sally is single and wasn’t looking for anything, but is now open to possibilities with Wyatt. Her honesty and history with Bill might just create a possibility at Forrester, which Wyatt’s well-intended suggested aimed for.

Bill is single and wants to blackmail Steffy into marrying him. If that happens Kelly’s parents would be split and Liam might go back to Hope (Annika Noelle). Then again, Liam might go off the rails as his personality is of the sensitive type.

Liam found forgiveness and is overjoyed at being a father and in honestly wanting to be Steffy’s husband again. He isn’t pining for Hope, as Bill thinks. What appears to be developing amidst all of the above is a gathering of Bill’s enemies. Their common energy could easily be directed toward Diamont’s character at any point in time.

Regardless of how he presents himself, or thinks, Dollar Bill isn’t invincible. Never have Wyatt and Liam been more motivated to counter their dad. Who knows, they might eventually evidence that cold Spencer trait and bring down their dad along with the help of their family and friends. CDL is a leading source for everything linked to The Bold and the Beautiful. Check back regularly for B&B spoilers and news!