BY hellodrdavis on September 23, 2018 | Comments: one comment
Related : Soap Opera, Spoiler, Television, The Bold and the Beautiful 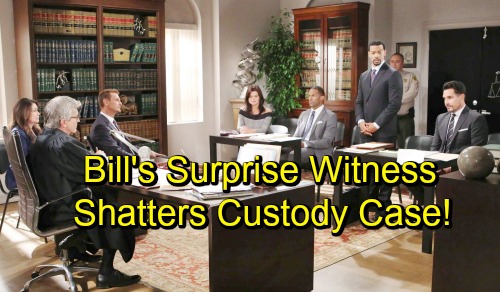 The Bold and the Beautiful spoilers tease that Bill (Don Diamont) is going to throw everyone for a loop during the custody hearing. Bill has been at a disadvantage ever since Katie (Heather Tom) first threatened to file for full custody of Will (Finnegan George). His past behavior toward his sons isn’t going to look good, plus now Katie and Thorne (Ingo Rademacher) can present themselves as a married couple with a stable home to the judge.

Right now, it looks like Bill will have Wyatt’s (Darin Brooks) testimony, since Wyatt has been subpoenaed to testify on Bill’s behalf. And Bill will be able to bring up Katie’s alcoholic past, when she neglected and endangered Will during his younger years. But that will only get Bill so far, now that Katie’s no longer drinking and is providing Will a stable home.

What Bill really needs is someone (besides Wyatt) who can testify on his behalf, and B&B spoilers say that he’ll indeed present a surprise witness that will make waves in the courtroom. But who could it be? Who would actually testify for Bill and against Katie at this point? There are four glaring possibilities.

First off, it could be Brooke (Katherine Kelly Lang). B&B spoilers indicate that Brooke will testify for Bill, so she’s not really a “surprise” witness for viewers, although her testimony may certainly come as a surprise to Katie, Ridge (Thorsten Kaye) and others. And it would be just like Brooke to keep her intentions to testify a secret from Ridge until the moment she’s called to testify.

Brooke’s testimony could really help Bill and damage Katie’s case. She could testify about how Bill’s a loving father despite his mistakes, plus about how Katie fell apart after Will’s birth and turned to the bottle instead of taking care of her son.

Another possibility is that Steffy (Jacqueline MacInnes Wood) could be Bill’s surprise witness. But what could Steffy offer at the custody hearing? Well, Steffy could tell Judge McMullen (Joe Lando) that her affair with Bill was consensual – something that would be important since Ridge led the judge to believe that Bill took advantage of Steffy. Steffy might also be willing to talk about Bill’s good qualities, given that she has a soft spot for Bill.

Some fans have speculated that Taylor (Hunter Tylo) may be Bill’s surprise witness, on the grounds that Taylor owes Bill for not turning her in after she shot him. But given the way that Taylor intensely despises Bill for breaking up Liam (Scott Clifton) and Steffy, this possibility is probably the most unlikely.

Someone Who Could Expose Ridge’s Judge Tampering

No matter who ends up as Bill’s surprise witness, it seems that this person will make a big splash. Who do you think it will be? Stay tuned to the CBS soap and don’t forget to check CDL often for the latest Bold and the Beautiful spoilers, updates, and news.