BY hellodrdavis on September 5, 2018 | Comments: one comment
Related : Soap Opera, Spoiler, Television, The Bold and the Beautiful 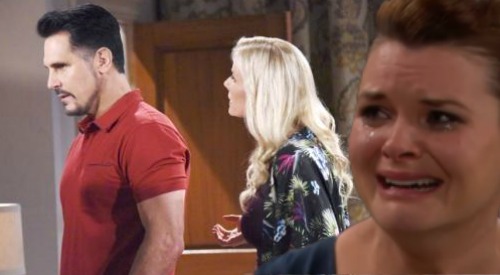 The Bold and the Beautiful spoilers tease that Katie (Heather Tom) will struggle with second thoughts when it comes to pursuing full legal custody of Will (Finnegan George) from Bill (Don Diamont). She desperately wants to create a more stable life for Will and protect him from the disappointment of Bill’s inevitable cancellations and neglect. But it will be difficult to take Bill on, and she’ll need plenty of support.

Katie’s got Thorne (Ingo Rademacher) for support, and Ridge (Thorsten Kaye) is on board with Katie’s cause, too. Both men think that Bill has been a terrible role model for Will and that he should have no part in Will’s life. But Brooke (Katherine Kelly Lang) is a different story. B&B spoilers say that Brooke will offer her full support to Bill, and not to her sister.

Brooke will feel that Katie’s wrong to try to limit Bill’s access to Will. Brooke will likely acknowledge that Bill hasn’t been the best dad in recent months, when he was overcome with his obsession for Steffy (Jacqueline MacInnes Wood). But Brooke will feel strongly that Bill should maintain joint custody of Will, and that he should be allowed as much time with Will as possible.

However, Brooke will do more than simply offer her moral support to Bill. B&B spoilers say that she’ll agree to speak on Bill’s behalf at the custody hearing. This is going to cause some serious difficulties in Brooke’s marriage, as Thorne won’t be keen on Brooke taking Bill’s side. But it should also cause some problems between Brooke and Katie.

Katie will probably feel that Brooke’s actions are a betrayal. She’ll likely feel that sisters are supposed to support each other and not actively work to undermine each other. But Brooke has always had a soft spot for Bill, and this won’t be the first time she’s betrayed Katie for Bill. That history surely won’t be lost on Katie.

Whether this will grow into a full-scale rift between the Logan sisters remains to be seen, but chances are it will lead to some serious tension, especially when Brooke actually speaks on Bill’s behalf at the custody hearing.

Brooke’s decision to support Bill in the custody case will affect a lot of people. Do you think that it will damage Brooke and Katie’s relationship? Stay tuned to the CBS soap and don’t forget to check CDL often for the latest Bold and the Beautiful spoilers, updates, and news.