The Bold and the Beautiful Spoilers: Brooke Drawn Back to Bill After ‘Bridge’ Crumbles – Can’t Resist Her Beloved Bad Boy 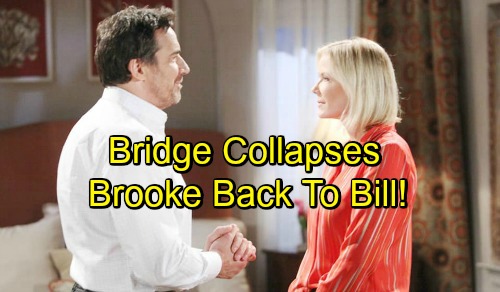 The Bold and the Beautiful (B&B) spoilers tease that Bill (Don Diamont) still has some fierce threats out there. Liam (Scott Clifton) is focusing on his family these days, so he may not sink a lot of effort into dealing with his dad. He’d rather spend that time bonding with Steffy (Jacqueline MacInnes Wood) and Kelly. However, that doesn’t mean Bill will get off scot-free!

B&B fans know Bill’s made many enemies and they’re bound to be coming for him. Wyatt (Darin Brooks), Sally (Courtney Hope) and even Quinn (Rena Sofer) could cause problems. There’s sure to be more drama with Taylor (Hunter Tylo), too. Bill has leverage since Taylor shot him, but she’ll still get caught up in trouble.

The Bold and the Beautiful spoilers say Bill will struggle to give up on Steffy, but he’ll just have to accept the situation eventually. Even if things shift back in Hope’s (Annika Noelle) favor, Steffy isn’t going to want Bill. That would just make her even angrier. Steffy would blame Bill for setting all this in motion and making her lose the father of her child.

In other words, Bill doesn’t have a lot of happiness headed his way. He’s going to be broken and lonely, which means it might be time for a different love interest. Meanwhile, we’ve got Brooke (Katherine Kelly Lang) and Ridge’s (Thorsten Kaye) tension. Liam’s currently with Steffy, but what happens if he later chooses Hope? It’ll definitely rev up the conflict for “Bridge.”

Ridge and Brooke’s marriage may not survive another round of love triangle mayhem. They haven’t had too many warm moments lately. Even when they’re happy, the Liam saga’s always an underlying issue. Brooke and Ridge only want the best for their daughters, but this could tear their relationship apart.

Plus, B&B rarely keeps Brooke in one romance for too long. The countdown to “Bridge” destruction is likely underway, so we should start thinking about Brooke’s next pairing. Will she be drawn back toward Bill? He’s the bad boy that she just can’t quit. Now that Bill’s more hated than ever, a “Brill” reunion would really shake it up. Just think of all the Forrester, Spencer and Logan turmoil!