The Bold and the Beautiful Spoilers: Brooke Teams Up with Bill to Tear ‘Steam’ Apart – Fierce Mom Fights for Hope’s Happiness

BY Marcy Cohen on June 26, 2018 | Comments: one comment
Related : Soap Opera, Spoiler, Television, The Bold and the Beautiful 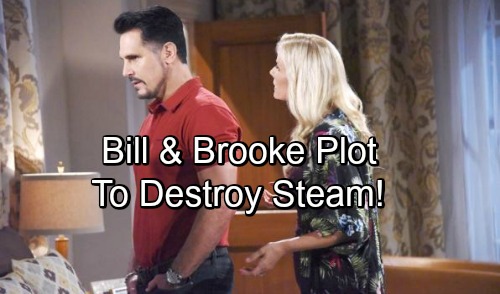 The Bold and the Beautiful (B&B) spoilers say Brooke (Katherine Kelly Lang) could have a change of heart soon. She recently ripped into Bill (Don Diamont) for all his manipulation, which caused severe pain for Hope (Annika Noelle). Of course, Bill fired back that he just wanted everyone to be happy. He believes he was doing Hope, Steffy (Jacqueline MacInnes Wood) and Liam (Scott Clifton) a favor.

Bill remains committed to a “Still” and “Lope” endgame, but will he have to work toward it alone? Perhaps Brooke could be persuaded to join Bill’s team. She’s full of rage right now, but that could die down within a few episodes. Even if it doesn’t, plenty of angry enemies have joined forces on soaps before. As long as two characters have a common goal, they can easily become a dynamic duo.

The Bold and the Beautiful spoilers say things will start to shift for Hope soon. She’s been trying to move on with her life and let Liam be content with Steffy, but this wedding delay could change the game. Will Hope decide she can’t give up? There’s still time for Liam to drift back to her, so she may be tempted to take her shot.

However, Liam’s love for Steffy may be tough to break. Now that Kelly’s in the picture, Liam’s got a rosy view of their future together. He wants this picture-perfect family, so he’ll be willing to fight for that. Although Liam’s the king of waffling, the complicated situation will leave Hope with a difficult battle.

After Hope opens up about her messy emotions, Brooke might make a risky decision. Will she determine that Bill’s got the right idea? Could Brooke become his ally and plot a “Steam” breakup? When it comes to this round of manipulating, Brooke doesn’t have to like it. She just has to do it! Reluctant B&B schemers can be more fun anyway.

Brooke would do just about anything to ensure Hope’s happiness. That could include destroying Steffy’s world. Bill may reiterate that if he gets his wish, Hope will get hers as well. He could convince Brooke that this is the only way to fix her daughter’s broken heart.

The Taylor (Hunter Tylo) angle obviously isn’t doing anything besides postponing the wedding. If Bill wants Steffy to even think about falling for him, he’ll have to leave her shattered and vulnerable. Liam going back to Hope may be Bill’s only chance!