The Bold and the Beautiful Spoilers: Can Bill Ever Be The Dad His Sons Need?

BY hellodrdavis on September 4, 2018 | Comments: 2 comments
Related : Soap Opera, Spoiler, Television, The Bold and the Beautiful 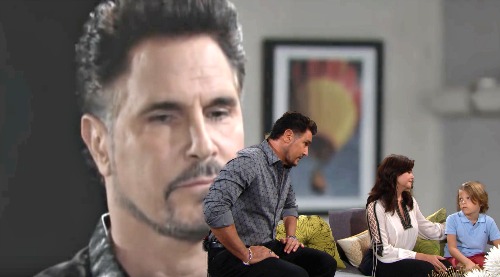 The Bold and the Beautiful spoilers tease that Bill (Don Diamont) will continue having problems connecting with his youngest son Will (Finnegan George). Bill had a disastrous experience when he tried to take Will for an overnight stay a while back. Will is growing up and Bill didn’t know how to relate to him or even what to do with him. It was a total fail.

And then Bill was faced with a situation in which he had to choose between an important business meeting and picking up Will for a visitation date. Bill chose the business meeting on the grounds that he could more easily reschedule Will. Fail #2.

And then there are the issues that arose earlier this summer between Bill and his grown sons, Liam (Scott Clifton) and Wyatt (Darin Brooks). In a nutshell, Bill used Wyatt to come between Liam and Steffy (Jacqueline MacInnes Wood), and tried to blackmail Steffy into marrying him instead of Liam. Needless to say, this wasn’t typical fatherly behavior, and it served to estrange Bill from both Liam and Wyatt.

After the recent issues with Will, and given the problems Bill has had with his grown sons, one must question whether Bill will ever be able to be the father that his sons need. It is a particularly important question where Will is concerned, since he is young and really needs his dad in his life.

Bill seems to understand the importance of being there for Will; he just has problems with the follow-through. For some reason, Bill runs when things get tough with Will. It’s uncharacteristic behavior for this tough businessman who never backs down from any other challenge. But when it comes to fatherhood, Bill tends to bail rather than step up.

The custody issue with Will could be the catalyst for change in Bill. Bill could take the opportunity to really get introspective and think about what kind of dad he wants to be to Will going forward. He could speak to Katie (Heather Tom) from the heart and ask for help in being the dad Will needs. Or, he could choose to attack Katie back. Unfortunately, B&B spoilers say he’ll do the latter and turn the situation into a war with Katie and Thorne (Ingo Rademacher).

What do you think of Bill as a father? Is he just in need of a push to be a better dad, or will he never be the dad that his sons need him to be? Stay tuned to the CBS soap and don’t forget to check CDL often for the latest Bold and the Beautiful spoilers, updates, and news.