The Bold and the Beautiful Spoilers: Comings and Goings – Familiar Faces Return for Drama – Guests for Exciting Preview Event

BY Heather Hughes on June 16, 2018 | Comments: one comment
Related : Soap Opera, Spoiler, Television, The Bold and the Beautiful 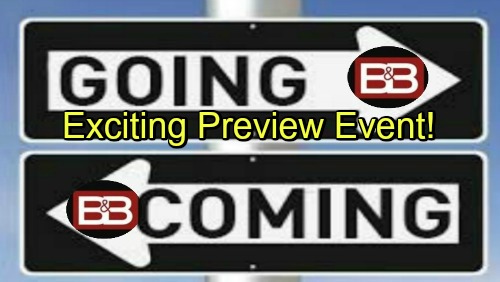 The Bold and the Beautiful (B&B) spoilers reveal that we’ve got some comings and goings news to pass along. First, let’s talk about some familiar faces. Achileas Andreas of Greece will be back as Simon on June 18. B&B fans know this character as a Forrester Creations intern, but his portrayer is a real-life prince. It’s always fun when Simon can be part of all the Forrester drama.

Achileas Andreas’ aunt will also appear this week. Theodora Greece will return as Bill’s (Don Diamont) loyal assistant, Alison. The Bold and the Beautiful spoilers say she’ll pop up on the new B&B episode June 19, so Bill will have some troubling task for her to accomplish. Alison may not have to play too dirty, but she’ll at least be involved in Bill’s agenda.

Other Bold and the Beautiful spoilers say Hunter Tylo will reprise her role as Taylor. She’ll be back on the scene starting June 22 and there’s a good reason why. We mentioned Bill’s scheming, so that’s probably why Taylor will reappear. Bill will blackmail Steffy (Jacqueline MacInnes Wood) in an attempt to stop her marriage to Liam (Scott Clifton). He’ll likely threaten to have her mom locked up.

B&B viewers will recall that Taylor shot Bill in a moment of pure rage. He agreed to keep quiet for Steffy’s sake, but what good did it do him? Steffy still got back together with Liam, so Bill will decide it’s time to turn things around.

After Bill delivers a threat, Taylor will visit Steffy and talk about her concerns. She won’t be in the loop on the blackmail plot yet, but she may still have prison on her mind. Taylor may worry that Bill will turn her in one day. If Steffy doesn’t cooperate, that day could come sooner than Taylor thinks!

In other news, some real-life dance students will do what they do best. These students attend Chapman University, but they’ll join the Forrester world on June 18. Emma (Nia Sioux) will need some backup for her big dance number. She’ll want to knock Hope’s (Annika Noelle) socks off as the Hope for the Future preview draws near.

Sarah Boardman, Annie Von Heydenreich, Kai Ogawa, Linsey Sandri and Lily Thongnuam will all be on hand to perform. That’s it for comings and goings! We’ll give you updates as other B&B details emerge. Stay tuned to the CBS soap and don’t forget to check CDL often for the latest Bold and the Beautiful spoilers, updates, and news.