BY Kinsley Goldman on September 22, 2018 | Comments: one comment
Related : Soap Opera, Spoiler, Television, The Bold and the Beautiful 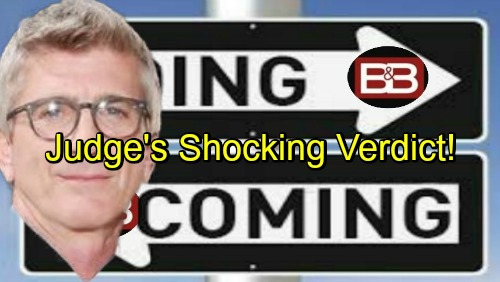 The Bold and the Beautiful (B&B) spoilers reveal that we’ve got some comings and goings news to pass along. First, let’s talk about some key players in the custody case. Joe Lando will be back on hand this week, September 24-28, as Judge Craig McMullen. The judge will wrestle with what to do about Ridge’s (Thorsten Kaye) shocking request before presiding over this case.

Brent Pope will also play the bailiff on September 27 as well as September 28. The following week, Pope will appear on October 1. Cynthia Pola will portray the court reporter on those same dates. The Bold and the Beautiful spoilers say the conflict will really rev up over the next couple weeks. Bill (Don Diamont) and Katie (Heather Tom) will drag each other through the mud in an effort to win this fight.

Before the custody drama gets underway, B&B fans will enjoy the fun of a wedding. Thorne (Ingo Rademacher) and Katie will rush to tie the knot, which means Carter (Lawrence Saint-Victor) will be around to officiate. He’ll gladly bring these two together for Will’s (Finnegan George) sake. There’s no guarantee this marriage will improve Katie’s odds in court, but it certainly couldn’t hurt.

Thorne’s willing to be a present and supportive father figure. That should mean something to the judge, especially once Bill’s nasty misdeeds come out in court. Of course, Katie’s no saint! The fact that she nearly married Will’s brother may become an issue. Her past relationship with Wyatt (Darin Brooks) could be viewed as scandalous. Throw in her previous drinking problem and there could be more trouble.

Katie obviously isn’t the greatest parent in the world, but Bill’s arguably worse. Still, the real issue here is whether Bill’s bad enough to be kept from his son. Does Katie really deserve sole custody? Does it matter in light of Ridge’s growing pressure? The Bold and the Beautiful spoilers say Judge McCullen will make his decision and deliver it during the week of October 1-5.