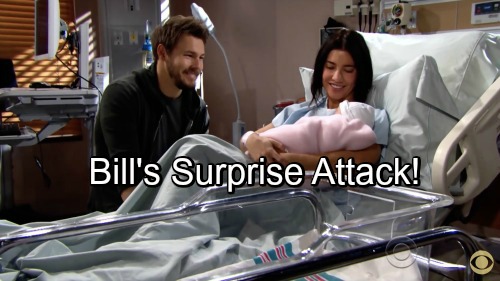 The Bold and the Beautiful spoilers tease that Dr. Phillips’ (Robin Givens) comments about Kelly not being born prematurely have sparked the potential that Bill (Don Diamont) is actually her father. Soap time doesn’t flow normally. However, based on when Steffy (Jacqueline MacInnes Wood) and Liam (Scott Clifton) were together, it is possible that he’s not Kelly’s dad.

Exact calculations can’t be conducted, including any reviews that motivated viewers (and readers) might do through CBS’ paid streaming service. So, this scribe is just thinking along with all other savvy daytime fans. Steffy and Liam believed Kelly was premature because they had determined her approximate birth date based upon what the other doctor told them in preceding months.

The paternity test Steffy conducted, which was accidentally found by Liam, only confirmed that Clifton’s character was the father. Steam then naturally chose to believe what they read, without wondering if suspicious actions were in play. Neither half of Steam questioned whether Bill had adjusted the paternity results at that time.

Who knows what Bill is capable of having done. It’s possible that he somehow knew when Steffy and Liam were together romantically because he had a working surveillance system in the cliff house where they were living at the time. Not that Bill would have viewed their bedroom activities (it is hoped), but rather that he gleaned said knowledge of their conversations while they were in other rooms.

All who are familiar with Dollar Bill know that he’s fully capable of having a paternity test skewed, especially where Steffy is concerned. Monitoring his son and daughter’s conversation, or actions, would simply be seen as protection.

Bill’s over-the-top confidence about Steam’s certain doom, Lope’s coming revival, and Steffy being with him feels like more than bravado. It’s almost as if he knows that Kelly is his child and he’s waiting to lower that baby boom on all involved when the time is right.

If B&B chooses to make Bill into Kelly’s father this storyline will go down as one of the most controversial in the show’s history. The current arc alone has already generated major interest from current fans and drawn more casual viewers back to this fictional Los Angeles setting.

Here’s hoping the above speculative scenario doesn’t happen, even though that path would be very engaging. Steam would end as a result. Lope likely would reform. Dollar Still would tie by their child. Hmm, that is exactly what Bill has been saying. Oh no! CDL is a leading source for everything linked to The Bold and the Beautiful. Check back regularly for B&B spoilers and news!