BY hellodrdavis on August 23, 2018 | Comments: one comment
Related : Soap Opera, Spoiler, Television, The Bold and the Beautiful 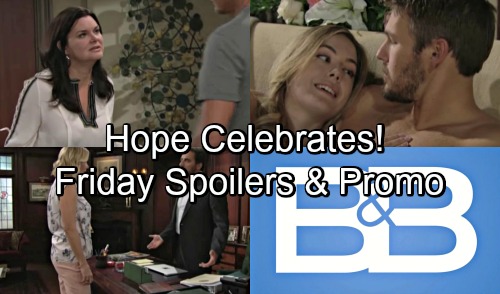 The Bold and the Beautiful spoilers for Friday, August 24, tease that Katie (Heather Tom) will fret over Thorne’s (Ingo Rademacher) suggestion that she seek full legal custody of Will (Finnegan George). Katie will wonder how it would even be possible, and she’ll think that legally she doesn’t stand a chance.

But Thorne will probably argue that Bill (Don Diamont) just hasn’t been there for Will. Thorne may argue that it’s detrimental to Will to keep him hoping for a relationship with someone who never shows up for him. Katie will know that’s true, but she still may not be fully sold on the full custody idea.

Meanwhile, on the new B&B episode Friday, August 24, Brooke (Katherine Kelly Lang) and Ridge (Thorsten Kaye) will discuss the Will custody issue. Ridge will defend Thorne and his motivations for asking Katie to seek full custody, arguing that Thorne is doing what’s best for Will. B&B spoilers say that Brooke will disagree with Ridge on the issue.

Brooke may take issue with Thorne’s actions. She may argue that while Bill has his issues, he’s still always going to be Will’s father and deserves access to his son. She may also think that Thorne is overstepping his bounds. Regardless, expect Brooke and Ridge to agree to disagree on the matter.

Finally, on Friday, August 24, Hope (Annika Noelle) and Liam (Scott Clifton) will enjoy their staycation honeymoon together in the cabin. B&B spoilers say that the two will fall more in love as they have each other all to themselves. Hope will muse that this is exactly what she wanted…to be alone with her husband.