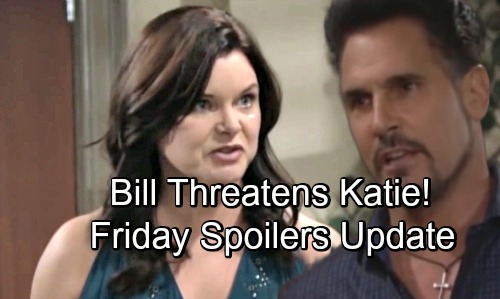 The Bold and the Beautiful spoilers for Friday, August 31, tease that Bill (Don Diamont) and Katie (Heather Tom) will continue their discussion about Will (Finnegan George), and things will get heated. After encountering Carter (Lawrence Saint-Victor) at Katie’s place, Bill will realize that Katie may be serious about going after full legal custody of Will.

Katie and Bill will get into it, and Katie will tell Bill forcefully that she’s going after full custody of their son. Of course, Bill won’t be happy about the situation, and he’ll tell Katie that she’s started a war she cannot win. Bill intends to fight with everything he’s got to keep her from winning full custody.

Will Bill turn around and seek full custody in return? Or will his efforts remain on maintaining joint custody? Whichever route he goes, he’ll go after Katie with everything he’s got and Katie’s alcoholic past will come back to haunt her. Bill means business, as he’s shown telling Katie that “there’s no way in hell that you’re taking my kid from me.”

Meanwhile, on B&B’s new episode on Friday, August 31, Hope (Annika Noelle) will open up to Brooke (Katherine Kelly Lang) about her situation with Liam (Scott Clifton), Steffy (Jacqueline MacInnes Wood), and Kelly (Gabriel Sporman). Hope and Brooke will likely discuss Kelly’s fever, which sent both Steffy and Liam rushing home from work to tend to her.

But does Hope protest too much? Some part of her must be at least a little worried, given how fast Liam left her and took off with Steffy. Plus, even though there may not be anything going on between Liam and Steffy, the fact remains that Hope was quickly left behind, and this may be a signal of things to come.