BY Heather Hughes on July 12, 2018 | Comments: one comment
Related : Soap Opera, Spoiler, Television, The Bold and the Beautiful 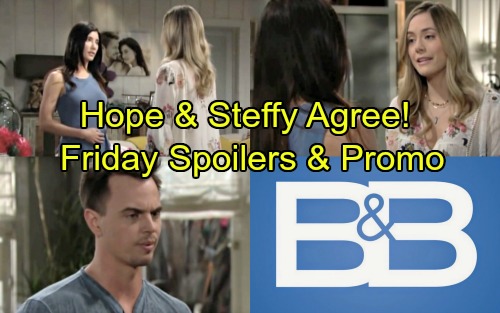 The Bold and the Beautiful (B&B) spoilers for Friday, July 13, tease that Steffy (Jacqueline MacInnes Wood) will focus on what’s most important. From the moment Steffy gave birth, Kelly mattered more than anything else. Steffy will continue to make her position clear to Hope (Annika Noelle). She’ll insist that she’s going to look out for her daughter and that means fighting for Daddy Liam (Scott Clifton).

However, Hope will suggest that Steffy shouldn’t get too comfortable. She won’t believe they’ll be playing house for long! Hope doesn’t know how all this will shake out, but she knows Liam loves her. Of course, Liam also loves Steffy and that’s the problem they’re all dealing with. As long as Liam remains torn, there’s going to be plenty of love triangle turmoil.

Hope will insist that this has to be Liam’s choice. The Bold and the Beautiful spoilers say Steffy will agree for once. She’ll admit she can’t make Liam’s decision for him, but she’ll point out that Hope can’t either. Liam will just have to look in his heart and figure out which woman he truly wants. That’s not going to be easy with two lovely ladies and two beloved babies.

While Steffy and Hope wrap up their confrontation, Bill (Don Diamont) will drop by Wyatt’s (Darin Brooks) place. B&B fans can expect Bill to do something out of the ordinary. He’ll actually apologize for causing so much trouble. The Bold and the Beautiful spoilers say Wyatt will be blown away by the shocker. Bill’s apologies only come once in a blue moon, so Wyatt had better savor the moment.

During their chat, Wyatt will let something slip about Liam’s expanding family. He’ll eventually admit that Hope’s pregnant and Liam doesn’t know what to do. Wyatt may note that Bill’s to blame for all this, but at least Liam views the baby as a blessing.

Nevertheless, Wyatt will undoubtedly warn Bill to stay away from Steffy. The last thing Liam needs is another complication, but you can bet Bill will stir the pot anyway. Finally, Emma (Nia Sioux) will put on quite a show for Xander (Adain Bradley). He’ll be impressed by her dance routine and offer loads of praise.

Xander and Emma had better watch out for Zoe (Kiara Barnes). The closer they get, the more chaos she’ll cause! We’ll give you updates as other B&B news comes in. Stay tuned to the CBS soap and don’t forget to check CDL often for the latest Bold and the Beautiful spoilers, updates, and news.