The Bold and the Beautiful Spoilers: Friday, June 15 – Sally’s Back with Big Bombshells – Liam Proposes to Steffy 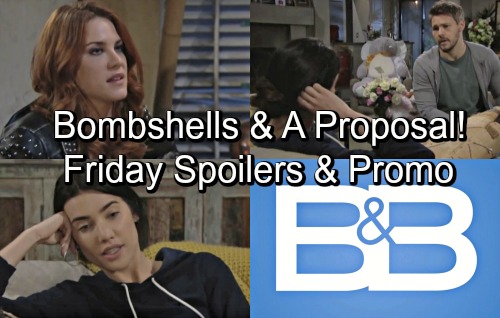 The Bold and the Beautiful (B&B) spoilers for Friday, June 15, tease that Wyatt (Darin Brooks) will struggle with heartbreak. He wishes things could’ve turned out differently with Katie (Heather Tom), but their relationship was just too complicated in the end. Wyatt will realize he has to let go, but he’ll still deal with plenty of pain and regrets.

In an effort to ease his suffering, Wyatt will plan to drink the night away. He’ll show up at the Bikini Bar and order something to curb his sadness. To Wyatt’s surprise, a familiar redhead will be doing the same thing. Sally Spectra (Courtney Hope) will be sitting at the same bar, so Wyatt will ask about her return. He’ll wonder what brought Sally back to Los Angeles, but the story won’t be pretty.

Sally will suggest that her life continues to be a train wreck. She’s once again become unlucky in love, so that’ll definitely be weighing on her mind. It looks like Thomas (Pierson Fode) dumped her and reunited with Caroline (Linsey Godfrey). Sally naturally wanted to get away from her ex, but she must’ve felt like she had nowhere to go. She may not even know why she headed back to LA.

Wyatt might share his own problems and bond with Sally in the process. B&B’s weekly promo shows Sally pulling a gun on Wyatt, so there must be a twist coming. Will it be a strange fantasy or perhaps a vengeful move regarding Bill (Don Diamont)? Regardless, the incident won’t be a huge deal. Next week, Wyatt and Sally will be on the road to romance.

Meanwhile, Liam (Scott Clifton) and Steffy (Jacqueline MacInnes Wood) will also have Sally on their minds. They’ll recap her role in their relationship drama, but Liam will show some compassion. Bill (Don Diamont) clearly made Sally miserable from day one. Steffy will concede that’s true, but she’ll expect Sally to find success again. She’ll contend that nothing keeps Sally Spectra down for long!

Later, Liam will prove he’s serious about Steffy and their future. He’ll make another passionate speech about his family and the life they’re building together. Liam will want more than just the title of father. He’ll want to be Steffy’s husband as well.

The Bold and the Beautiful spoilers say Liam will propose to his love, so Steffy should be over the moon. However, she’ll also want to make sure Liam’s completely committed to her. Steffy would be crushed if Liam walked away again. She’ll just want Liam to promise that Hope’s (Annika Noelle) not going to be an issue moving forward.