The Bold and the Beautiful Spoilers: Friday, June 29 – Pam Warns Hope to Stay Away from Liam – Wyatt’s Good Intentions Backfire 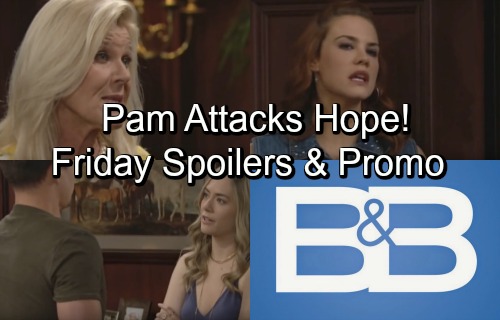 The Bold and the Beautiful (B&B) spoilers for Friday, June 29, tease that Wyatt (Darin Brooks) and Hope (Annika Noelle) will continue their tense discussion. Hope isn’t pleased about working with Sally (Courtney Hope). She’s not thrilled about Wyatt’s relationship with the sneaky Spectra either!

However, Wyatt will keep defending Sally and the changes she’s made. As Sally listens in on their chat, Wyatt will talk about her good qualities. He’ll reiterate that Sally’s been through a lot. Wyatt will just want Hope to cut her a little slack and learn to live with this working arrangement.

Hope will sense that Wyatt’s already in over his head, so she’ll warn him about falling fast and hard. Since Hope doesn’t trust Sally, she’ll want Wyatt to promise he’ll be careful. Of course, Wyatt will demand a promise in return. He’ll want Hope to give Sally a real chance, but that may be difficult for her to do. Even if Hope’s willing to overlook the past, Sally’s attitude could create new problems.

Despite Wyatt’s good intentions, it seems Sally won’t appreciate his speech to Hope. She may feel like he’s trying to fight her battles for her. Sally’s had enough of that with Thomas (Pierson Fode) and Liam (Scott Clifton). She’s sick of men stepping up only to bail later, so she’ll insist that she can take care of herself. Sally will contend that she doesn’t need anything from Wyatt or anybody else.

Fortunately, this will probably just be a minor bump in the road. Sally and Wyatt really hit it off, so it’ll be tough to tear away now. Besides, Wyatt likes Sally’s feisty side. She’s a real firecracker and it obviously turns him on! As for Sally, she should soften and be grateful for Wyatt again soon.

Meanwhile, The Bold and the Beautiful spoilers say Hope will face off with an irritated Pam (Alley Mills). Brooke (Katherine Kelly Lang) is a real man eater in Pam’s eyes, so she fears Hope will cause similar trouble. As a result, she’ll snarl out a stern warning. Pam will insist that Hope needs to stay away from Liam (Scott Clifton), but B&B fans know that’s not going to happen!