BY Heather Hughes on March 29, 2018 | Comments: one comment
Related : Soap Opera, Spoiler, Television, The Bold and the Beautiful 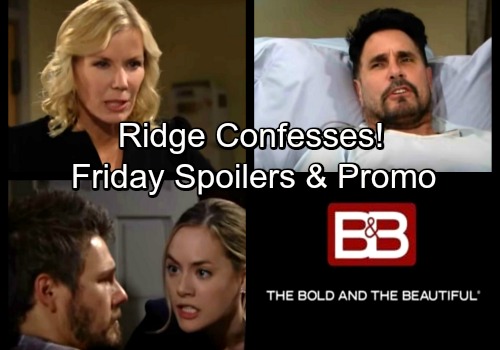 The Bold and the Beautiful (B&B) spoilers for Friday, March 30, tease that Hope (Annika Noelle) will struggle to make sense of Liam’s (Scott Clifton) claims. After a flood of memories resurfaced, Liam told Hope that he shot Bill (Don Diamont). He’s a mess now that things are becoming clearer.

Naturally, Hope will express some doubt on Friday. She’ll refuse to believe that Liam tried to kill his own father – at least at first. However, Liam will spill the whole story and try to convince Hope of his guilt. Once Hope accepts that he did this, they’ll debate Liam’s next move. Making a confession could change everything for Liam, so he’ll have a lot of contemplating to do.

While Hope supports Liam, Brooke (Katherine Kelly Lang) will continue to work on Bill. She’ll reiterate that there’s no way he could’ve seen Ridge (Thorsten Kaye) pull the trigger. Bill will snap that he would never put an innocent man in jail. He loathes Ridge, but he’ll argue that his hatred has nothing to do with his accusations.

Brooke will urge Bill to look her in the eye and tell her he saw Ridge do it. She’ll be determined to get her husband off the hook, but Bill will put up a fight. Across town, Thorne (Ingo Rademacher) will pay Ridge a visit. He’ll give his brother a pep talk and suggest that the Forresters have his back. 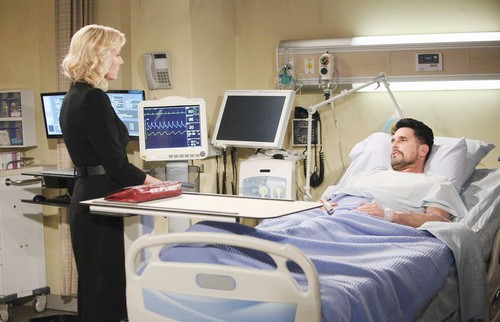 Thorne will promise that they’re going to get everything straightened out eventually. He’ll just think Ridge needs to be patient. The Bold and the Beautiful spoilers say Steffy will pop in as well. She’ll want her dad to know that he’s got plenty of people in his corner. Steffy won’t rest until Ridge is a free man again.

However, Ridge is about to deliver some shocking news that rocks his family. B&B fans can expect a real bombshell! Ridge will announce that he intends to protect Quinn (Rena Sofer). He’ll realize that the cops are closing in on her, but he’ll contend that they’ve got another wrong suspect.

Ridge will plan on doing whatever it takes to keep Quinn out of prison. It looks like that includes making a confession if need be. The Bold and the Beautiful spoilers say the drama’s heating up, so we’ll give you updates as other B&B details emerge. Stick with the CBS soap and don’t forget to check CDL often for the latest Bold and the Beautiful spoilers, updates and news.