The Bold and the Beautiful Spoilers: Friday, May 25 – Wyatt’s Wedding Shocker – Taylor Fumes Over Brooke’s Manipulation

BY Heather Hughes on May 24, 2018 | Comments: one comment
Related : Soap Opera, Spoiler, Television, The Bold and the Beautiful 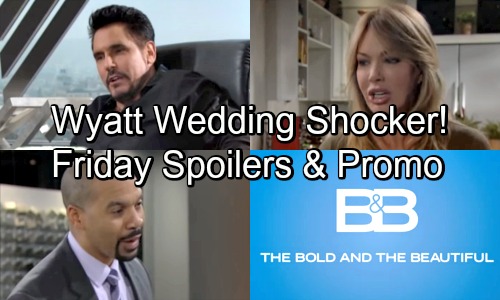 The Bold and the Beautiful (B&B) spoilers for Friday, May 25, tease that Hope (Annika Noelle) and Liam (Scott Clifton) will be ready to say their vows. Carter (Lawrence Saint-Victor) will be there to lead them through the process. He’ll kick things off with a short speech about why they’ve all gathered. Carter will insist they get to celebrate the marriage of two people who love each other.

Wyatt’s the best man, so that’ll make this whole ordeal even harder. He’ll be right next to Liam and Hope as they prepare to tie the knot. Before they can make this official, Wyatt will halt the ceremony. He’ll probably declare that there’s something Liam should know first. B&B fans should see plenty of shocked looks in the crowd. There’ll inevitably be some worried whispers and gasps as well.

Next week, Wyatt will lead Liam out of the room for a private chat. It’s almost confession time, so stay tuned for all the mayhem. Meanwhile, Justin (Aaron D. Spears) will warn Bill (Don Diamont) about this exact possibility. He’ll insist there’s a good chance Wyatt will crack.

Justin just won’t think Bill’s bribes and buttering up will pay off. He’ll contend that Wyatt will ultimately spill the secret, so Bill needs to accept that. Of course, Bill will be in denial. He’ll feel like he’s meant to be with Steffy (Jacqueline MacInnes Wood) and no one’s going to stand in his way.

Bill will assure Justin that this wedding will move forward. He’ll count on Wyatt to keep his mouth shut, but he’ll only end up disappointed. The Bold and the Beautiful spoilers say major backlash is brewing for wicked “Dollar Bill.”

Over with Taylor (Hunter Tylo), her rage will continue to build. Taylor hates Bill for his role in Steffy’s suffering, but Brooke’s (Katherine Kelly Lang) getting most of her fury right now. The Bold and the Beautiful spoilers say Taylor will call her enemy a “shameless manipulator.” She’ll think Brooke’s mostly to blame for this rushed wedding.

Will Taylor eventually seek revenge? Brooke has certainly caused some trouble, so she’d better be careful! We’ll give you updates as other B&B news comes in. Stick with the CBS soap and don’t forget to check CDL often for the latest Bold and the Beautiful spoilers, updates, and news.