BY hellodrdavis on October 18, 2018 | Comments: one comment
Related : Soap Opera, Spoiler, Television, The Bold and the Beautiful 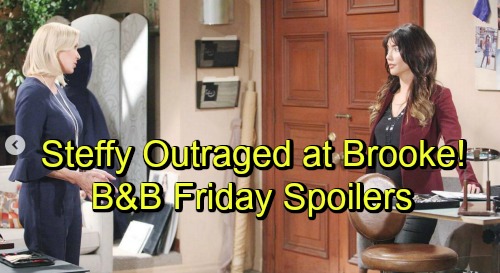 The Bold and the Beautiful spoilers for Friday, October 19, tease that Ridge (Thorsten Kaye) will be more up in arms than ever about Bill’s (Don Diamont) interference in his life. He’s just found out that Bill once again tracked down Brooke (Katherine Kelly Lang) out in public. Ridge is sure that Bill is after his wife, and he’s livid about it.

Ridge is also peeved that Katie (Heather Tom) is letting Bill have as much access to Will (Finnegan George) as he wants. In Ridge’s mind, the custody ruling giving sole custody to Katie was the right outcome, and he doesn’t like it that Bill doesn’t have to live by it.

Ridge will decide that it’s time to pay Bill a visit and set the score straight. He’ll ask Pam (Alley Mills) to track down Bill, and Pam will know that trouble is on the way, given Ridge’s demeanor and agitation. Whatever Ridge has in store for Bill, it doesn’t look good.

Meanwhile, on the new B&B episode on Friday, October 19, Brooke will have a talk with Steffy (Jacqueline MacInnes Wood). She’ll realize that Steffy is probably angry with her, and she’ll want to reassure Steffy that the kiss Steffy witnessed between her and Bill was a mistake. She’ll probably also point out that Bill instigated the kiss and that she immediately pulled away.

Brooke will also express concern about Ridge, who is absolutely outraged by the mere mention of Bill these days. Brooke can sense that trouble is brewing, given Ridge’s absolute hatred for Bill. She’ll want to fill Steffy in on her concerns and she may wonder if Steffy’s noticed the same.