BY Heather Hughes on September 6, 2018 | Comments: one comment
Related : Soap Opera, Spoiler, Television, The Bold and the Beautiful 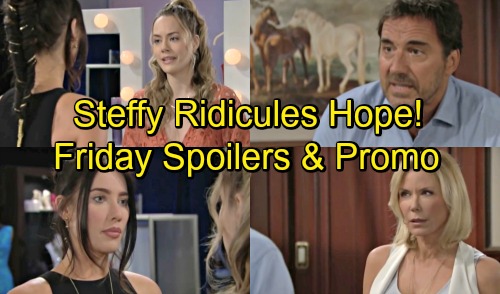 The Bold and the Beautiful (B&B) spoilers for Friday, September 7, tease that Hope (Annika Noelle) and Steffy’s (Jacqueline MacInnes Wood) conflict will intensify. They’ve tried to keep things civil so far, but Hope wasn’t happy about Steffy’s pitch to Ridge (Thorsten Kaye). She feels like Steffy’s trying to gain an unfair advantage as his daughter.

Of course, Steffy believes she’s entitled to fight for her line. That’s especially true since she already lost Liam (Scott Clifton) to Hope. Steffy’s basically married to work now, so she thinks she needs this more than her rival. Besides, Hope should be taking it easy for the baby’s sake. Steffy’s the one who can go all in and give the company 100 percent.

However, Hope will have a very different view of the situation. She’ll rant about how hard she’s worked on the Hope for the Future line. Hope will wonder if Steffy knows how much this means to her. Steffy will counter that it’s not about what their lines mean to them personally. She’ll shrug as she suggests that sex sells. Steffy will think profits are more important that HFTF’s lofty ideals.

Hope will likely hit the roof over that comment, but Steffy’s not wrong. Ridge has to make a decision based on what’s best for Forrester Creations. The Bold and the Beautiful spoilers say he’ll try to ignore who’s involved and what’s at stake. Ridge will want to prove that he can be objective as well as a good leader.

Unfortunately, Brooke (Katherine Kelly Lang) won’t think there’s any chance Ridge can be fair. They’ll have a fierce argument in Friday’s new B&B episode, September 7. The Bold and the Beautiful spoilers state that Brooke will demand an answer. She just asked Ridge which daughter he’d be kicking to the curb, but Ridge will drag his feet on declaring a winner.

Nevertheless, the choice has to be made and announced eventually. It sounds like Ridge is about to cause chaos at Forrester Creations. He’ll make some serious waves, so stay tuned for all the drama. We’ll give you updates as other B&B news comes in. Stick with the CBS soap and don’t forget to check CDL often for the latest Bold and the Beautiful spoilers, updates and news.