The Bold and the Beautiful Spoilers: Hope Can’t Let Guard Down – Liam Flips Back To Steffy

BY Sean O'Brien on August 25, 2018 | Comments: one comment
Related : Soap Opera, Spoiler, Television, The Bold and the Beautiful 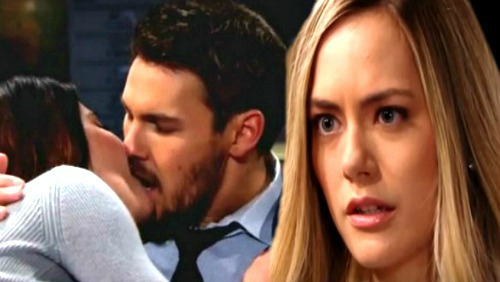 The Bold and the Beautiful spoilers tease that Hope (Annika Noelle) has achieved her goal by marrying Liam (Scott Clifton). However, she can’t let her guard down, as he’s often been easily persuadable.

As B&B viewers know, Liam only proposed to retry Lope’s wedding after Steffy (Jacqueline MacInnes Wood) told her true love to do so. That came after she took off his engagement ring, put it on Hope’s finger and told her to marry Liam. Digest that rehash. Okay, now read forward.

Devoted soap fans can simply pull from their own memory banks to recall the following. If an additional refresher is desired, they could also give their human-like devices a verbal command.

“Show me Sally (Courtney Hope) and Liam under the Spectra Fashions building rubble.”

As was seen, inside our internal screens, or also through digital ones, Liam and Sally were trapped underneath a collapsed building. They free-willed themselves to that precarious position because of their resistance to Bill (Don Diamont).

Liam joined Sally’s cause as she fought off Diamont’s character. Liam emotionally invested in Sally’s poor soul status, while choosing to overlook that she’d been Steffy’s nemesis. As a result of the building blast, he also twice kissed Ms. Spectra.

Awhile thereafter Liam foolishly told Steffy that Sally had kissed him and that he returned her smooch with another of his own. His truthful explanation, that both people thought they were about to die, didn’t soothe Steffy’s outrage.

Steffy ran off and was somehow trailed by Bill to the Forrester guest house. Still furthered their past and apparently latent romantic interest to a higher level and slept together, which was eventually revealed and split Steam.

Liam then entered another of his blue periods, where he was ever-conflicted. He loved Steffy, but also Hope, who was revealed to be pregnant with his baby. Liam’s forthcoming second child was conceived during Steam’s break-up period, again arguably reconfirming his ability to be swayed.

It’s long seemed to many characters and fans that Liam’s personality is better paired with Hope’s. Both people are generally well-intentioned and idealistic. They seem to project an interest in others and are often lauded for their selfless nature’s. Whether those actually are their lead traits is a point of conjecture, as little in B&B’s world, if anything, is settled debate.

Hope seems to be the stronger personality in Lope’s pairing. She leads the way, while Liam follows. However, he’s also now influenced by Kelly’s existence, which is natural for any father and his first-born child. As long as Steffy is around she will be an ever present danger to Lope.

So, Hope would be wise to follow Brooke’s (Katherine Kelly Lang) advice. The fight for Liam will always continue, which is what Hope has actually agreed to do. Savvy B&B fans know that it’s only a matter of time until Liam flips back to Steffy. CDL is a leading source for everything linked to The Bold and the Beautiful. Check back regularly for B&B spoilers and news!