The Bold and the Beautiful Spoilers: Hope Offers Liam Divorce and a Return To Steffy and Kelly

BY Heather Hughes on December 17, 2018 | Comments: one comment
Related : Soap Opera, Spoiler, Television, The Bold and the Beautiful 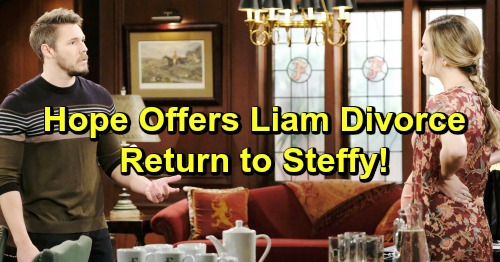 The Bold and the Beautiful (B&B) spoilers tease that Hope (Annika Noelle) will get fed up with Liam (Scott Clifton) and Steffy’s (Jacqueline MacInnes Wood) lingering connection. She knew Steffy would always be in Liam’s life because of Kelly and she was fine with that. However, there’s a difference between remaining a doting daddy and being hung up on your ex-wife.

After Liam sides with Steffy on the Taylor (Hunter Tylo) issue, Hope will think there’s more to the story. She’ll feel like they’re shutting down her concerns, so she’ll wonder if it has something to do with Liam’s desires. Hope will contend that maybe her marriage to Liam happened too fast. She’ll suggest that perhaps they made a mistake that needs to be corrected.

Liam will try to figure out what Hope is getting at. He won’t really understand, so Hope will make herself crystal clear. She’ll contend that Liam shouldn’t be with her if he has any doubts. Hope will point out that Steffy’s been rocking it as a strong, single mom. She’ll suggest she could easily do the same if Liam wants to bail.

Hope will add that Liam keeps pushing for this big blended family. She won’t think that’s possible because of Taylor. Besides, we’re really talking about two B&B families here anyway. Liam can’t be in two places at once, so the woman he shares a life with will get most of his time. That goes for their child, too.

Liam will look dumbfounded by Hope’s shocking offer, but she’ll be adamant about hearing his choice. Of course, Steffy should pipe up eventually. Does she even want Liam back? We’d say so based on her usual behavior around him, but she may not admit it.

Will Liam take this startling second chance at “Steam” or insist that Hope’s overreacting? The Bold and the Beautiful fans can undoubtedly expect the latter for now, but you never know what the future will bring. We’ll give you updates as other B&B news comes in. Stay tuned to the CBS soap and don’t forget to check CDL often for the latest Bold and the Beautiful spoilers, updates, and news.