The Bold and the Beautiful Spoilers: Hope Realizes Her Dream, But Liam Is A Playboy – Heartbreak Follows

BY Sean O'Brien on July 29, 2018 | Comments: one comment
Related : Soap Opera, Spoiler, Television, The Bold and the Beautiful 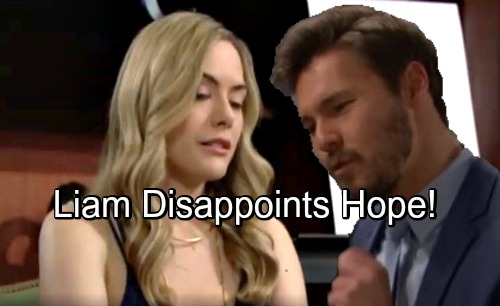 The Bold and the Beautiful spoilers tease that Hope (Annika Noelle) better be careful what she wishes for because Liam (Scott Clifton) might not be the prize she’s expecting. Now that Steffy (Jacqueline MacInnes Wood) has let the air out of Steam, Lope’s immediate future appears destined. But what about this couple’s longterm outlook?

As their parents projected, Hope and Liam will be together. Brooke (Katherine Kelly Lang) and Bill (Don Diamont) felt this outcome was likely, if not certain, based upon shared history. Of course Brooke wasn’t pressing this theory because she wanted to get with Liam, whereas B&B viewers know all about Bill’s open and now realized goal of possessing Steffy.

Hope shares a personality that’s similar to Liam’s. She’s all about searching for causes in far off lands while allowing herself to be blinded to logical truths. Bill’s tagging of his son and the mother of his second child as do-gooder’s is instantly rejected by those who believe the head of the Spencer clan is missing the point. Actually both sides, among the many that exist, make good points.

Liam is a grown man, chronologically. In practical terms though, he behaves in such a juvenile fashion that he can’t be taken seriously. Yet, he has often existed in periods where he’s been fully loyal to Steffy, or Hope.

Steffy believed in Liam, so much so that she prostrated herself under his ego in order to salvage their relationship. She was wrong, as has been stated in dialogue on countless occasions, for having that one-off with Bill. However, Liam has now twice willing involved himself, romantically, with other women.

The infamous Spectra Fashions’ building demolition led to Liam and Sally (Courtney Hope) being trapped and facing seeming death. What do two people do in that soapy situation? Well, kiss.

Liam felt compelled to tell Steffy he kissed Sally, twice, That set her off, Bill eventually found her at the Forrester guest house and fall fireworks were seen his eyes. Steffy was shocked when she woke up later, which circles back to the closeup shot of Wood’s tortured character.

No one should be surprised if Liam cuddles with Hope, but later wigs out. This guy is naive about life and has proven thus far to be uncomfortable with being tied down. Sure, he’s been a good father to Kelly during the past handful of weeks. But can anyone firmly claim that Liam will be there for his daughter indefinitely?

His second baby will be born by approximately year’s-end. And then what?

This scribe takes Liam at his word. He loves Steffy and Hope. Since he betrayed Steffy, couldn’t he also do the same where Hope is concerned whenever some new cause another appealing female is involved in catches this (play)boy’s interest?