The Bold and the Beautiful Spoilers: Hope Sparks Another Spencer War – Liam and Wyatt Once Again Fight for Her Love

BY Marcy Cohen on January 23, 2018 | Comments: one comment
Related : Soap Opera, Spoiler, Television, The Bold and the Beautiful 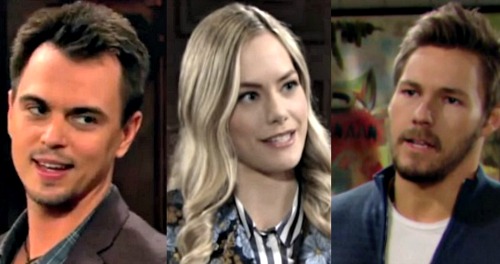 The Bold and the Beautiful (B&B) spoilers tease that Wyatt (Darin Brooks) will check back in with Liam (Scott Clifton). Now that Bill (Don Diamont) and Steffy’s (Jacqueline MacInnes Wood) drama is really blowing up, Wyatt will want to see how his brother’s coping. He’ll let Liam know that he has his back. This is a real mess, but it’s nice that Liam has people to lean on.

Wyatt will feel horrible about everything Liam’s going through, but they’ll find other topics to talk about as well. Naturally, Hope’s (Annika Noelle) return will come up. They’ll discuss how Hope’s back for good, but there could still be some bad blood here.

B&B fans will recall that Wyatt and Liam both fought for Hope’s heart. They later faced a similar battle for Steffy. Ivy’s (Ashleigh Brewer) feelings for Liam also caused issues in her relationship with Wyatt. One way or another, Wyatt and Liam always end up sparring over a woman. That could be the case this time around, too.

The Bold and the Beautiful spoilers say Liam could have a problem with Hope dating someone else. However, Wyatt will offer his brother a friendly reminder. He’ll point out that Hope is no longer with Liam and she can do whatever she pleases. Unless Liam makes his move, Hope will remain single and ready to mingle.

Wyatt won’t express interest in getting Hope back just yet. He’ll continue to dote on Katie (Heather Tom) over the next couple weeks. Of course, The Bold and the Beautiful spoilers say Wyatt’s plans could change down the road.

It looks like Wyatt won’t approve of Liam’s territorial attitude. He might think it’s best if Liam gives Steffy another chance or pursues a new path entirely. Perhaps part of Wyatt will want to leave the door open for himself. He loved Hope deeply once. Wyatt wanted to build a life with her, but everything fell apart.

Will Wyatt get the opportunity for a fresh start with Hope? Would that be a good idea or a recipe for disaster? Regardless, Wyatt and Liam seem poised for another round of competition. These two may never be able to separate their love lives!

B&B could have another Spencer love triangle in store. We’ll give you updates as other news comes in. Stay tuned to the CBS soap and don’t forget to check CDL often for the latest Bold and the Beautiful spoilers, updates and news.