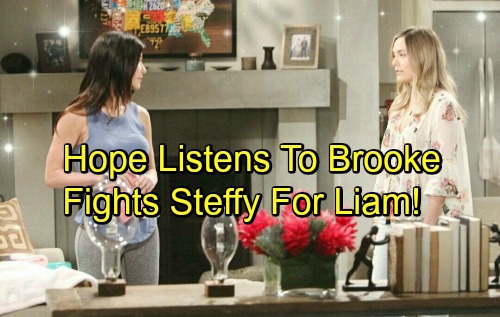 The Bold and the Beautiful spoilers tease that Hope (Annika Noelle) will be influenced by her mother. She’ll take Brooke’s (Katherine Kelly Lang) advice and aggressively pursue Liam (Scott Clifton).

Hope has hardly been a shrinking violet to-date. She slept with Liam at Brooke’s Lincoln log cabin knowing that precautions hadn’t been taken. So, it could be that Hope was hoping (pun intended) to get pregnant.

After confirming her pregnancy, Hope directly told Liam that she didn’t want to be that so-called other family. Noelle’s increasingly savvy character meant that she didn’t want Steam to exist as a married family with Kelly, while she lived with her mom and Liam’s second child.

While this developing transformation is happening, Steffy was just by Liam of the next baby news. She responded to it with strength, merely taking moments to compose herself and then telling Liam that together, they as a couple would be there for Hope. But there’s just one problem that Steffy needs to overcome before that declarative statement becomes reality.

Liam opted to annul Steam’s marriage earlier this year. Steffy knows that because she finally relented and signed the paperwork. Liam then almost married Hope at Brooke’s museum-like estate, a visual phrase gleaned from the bold introductory panoramic shots that are beautifully offered.

Wyatt (Darin Brooks) knew Bill (Don Diamont) created a ruse that made Liam believe Steffy and his father were still seeing each other, but he paused in telling his brother that reveal for selfish reasons. However, B&B’s edition of Johnny Depp burst just before the I do’s during Lope’s nuptials.

Hope actually called off the wedding. Shortly thereafter she told Liam to go back to Steffy and Kelly. It would be easy to imply that Liam will listen to Hope as time moves forward. Yet the powerful emotions he experienced through Kelly’s birth will likely keep him most strongly tied to Steffy until the baby he’s having with Hope is born.

Steam’s current momentum might be enough to make Liam agree to remarriage. If that happens, chances improve that Steffy keeps Kelly’s dad around. But Hope is now a power player and, using her mother’s plans, just might reverse Steffy’s fortunes.

Wood’s character instinctively assumed that she and Liam would stay together. Using that confidence she must remain consistent in her persuasion offensive, as Liam’s personality point is to please other people.

While Liam seems more suited to Hope, there’s no denying the deep chemistry that he shares with Steffy. Yes, this is a good soap triangle that B&B is presenting to more than three million daily live viewers each weekday.