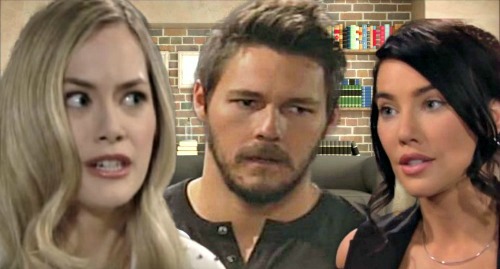 The Bold and the Beautiful spoilers tease that Hope’s (Annika Noelle) baby health scare could serve to reverse a storyline dynamic and unearth Steam’s revival. Would Liam (Scott Clifton) leave Hope and return to Steffy (Jacqueline MacInnes Wood) if Lope’s baby doesn’t make it? No, that wouldn’t happen immediately. Instead, the soapy process would likely be slow.

What is tying Liam to Hope right now, besides their love? Lope’s anticipated baby.

It seems likely that Liam would have remained with Steffy and Kelly if Hope wouldn’t have gotten pregnant during Steam’s relationship break. But Hope did get pregnant and that unborn human life propelled what finally became Lope, the married couple.

Hope’s sudden, terrifying pain, could easily telegraph the loss of her child with Liam, at some point. Liam would surely stick by Hope immediately thereafter, but he would no longer have a coming child obligation with his wife.

As Dr. Phillips (Robin Givens) digested, Liam became a two-time dad with two different women in a period of less than a year. This busy man, who is desired by two highly appealing women for reasons that baffle balanced minds, but can also be paired to other real life situations that readers are likely aware of, therefore has two family’s and thus, dual obligations.

Liam is fully living up to his double-dad status. It would not be fair to question his embrace of both commitments. But if Hope loses their child, his child commitment would drop to one.

Extensive time spent with Steffy and Kelly would work on Liam’s ever-malleable mind. He’s openly stated that he loves Steffy and Hope, without ever placing a percentage value on which emotions rank higher.

The pull of two women, Steffy and Kelly, would be stronger than the love Liam has for Hope, assuming she simply is his wife and also isn’t the mother of his second child. Hope is wise and would surely detect Liam’s balance of power shift.

Steffy has been honest and amazingly supportive of Lope. Her initial authorization created Lope’s Part II wedding ceremony, which certainly wasn’t destined. In so doing Steffy removed bitterness and what would have been resultant defensive feelings in Liam’s heart.

Yes, Steffy played the hero and Liam stands in admiration of her. The chances of Steam’s revival would logically increase if a health crisis results in Lope’s child being lost down the road. Though this is B&B, where other varying factors, drive character’s actions. So time will tell if Lope’s family expands, or if Steam resurrects.