The Bold and the Beautiful Spoilers: Hope’s Suffering Goes Too Far – Sparks Liam and Steffy Custody War Over Kelly

BY Marcy Cohen on September 21, 2018 | Comments: one comment
Related : Soap Opera, Spoiler, Television, The Bold and the Beautiful 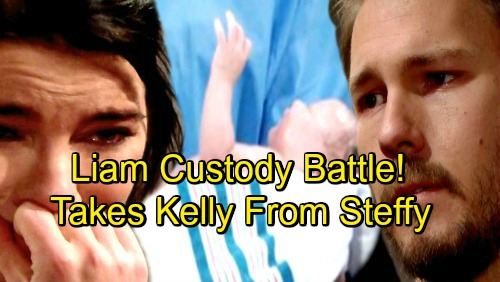 The Bold and the Beautiful (B&B) spoilers tease that Bill (Don Diamont), Katie (Heather Tom) and Thorne (Ingo Rademacher) will all be involved in a fierce court battle. Bill was hoping to stop this nightmare before it got that far, but that just won’t be possible. The conflict’s getting worse, so Bill will be prepared to fight for what he wants in front of the judge.

Of course, this custody war’s going to bring some nasty insults and dirty moves. Both Katie and Bill will have their pasts dragged into this. Every poor choice and flaw will be brought out into the open. They’ll just have to own up to their mistakes and hope that the judge sees things their way.

However, there can only be one winner here – if we can even call it that. It seems that no matter what the outcome is, Will’s (Finnegan George) going to be the real loser. His parents really need to focus on figuring out a peaceful solution. Instead, they’re refusing to back down and leaving Will caught in the middle.

Once this Bold and the Beautiful custody fight winds down, could another one be on the horizon? It’s worth mentioning that Liam (Scott Clifton) will testify for Katie. He’ll totally get why Katie feels the need to protect her child. It’s possible that’s foreshadowing a future stance for Liam. He’s currently co-parenting with Steffy (Jacqueline MacInnes Wood) successfully, but how long can the peace last?

That’s especially true since we’ve got so much tension between Hope (Annika Noelle) and Steffy. Liam cares about both women, but he has to give his wife the most support. He chose to marry Hope, so he owes her that.

B&B fans know Steffy has caused her fair share of accidents over the years. Since Hope’s pregnant, no one would be surprised if Steffy inadvertently caused a miscarriage. It’d bring some great drama and potentially turn Liam against his ex. He could argue that Steffy’s dangerous and make a play for sole custody of Kelly.

Hope would back Liam up since she could view this as another chance at motherhood. If she misses out on having Liam’s kid, she could decide she wants a shot at raising the one he had with Steffy. Maternal desires and revenge could both be motives.