BY Heather Hughes on July 13, 2018 | Comments: one comment
Related : Soap Opera, Spoiler, Television, The Bold and the Beautiful 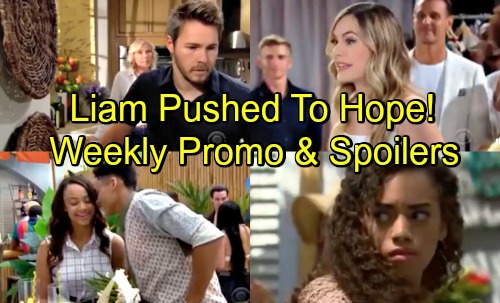 The Bold and the Beautiful (B&B) spoilers for the week of July 16-20 tease that it’s almost time for a fun fashion show. Everyone’s been hard at work on the Hope for the Future line’s latest collection. They’re just about ready to debut their new looks and give the crowd some great entertainment.

Emma (Nia Sioux) will be a bit nervous about showing off her choreography. This is a big deal, so she won’t want to blow it. Emma truly admires Hope (Annika Noelle) and doesn’t want to let her down. Fortunately, Emma will have a fantastic team of dancers backing her up. They’ll put in some extra practice as they get ready for this long-awaited event.

Xander (Adain Bradley) will reassure Emma, but he could find himself distracted soon. B&B fans know a face from Xander’s past has returned. Zoe (Kiara Barnes) is crazy, obsessed and incredibly determined. All of that adds up to one dangerous ex!

Zoe will finally reach out to Xander this week, but he won’t want to hear her excuses or apologies. Xander will just want Zoe to accept that they’re over. He’ll push Zoe to leave town, but he’ll doubt that she’ll do it. Xander is aware of Zoe’s obsession, so he won’t have high hopes about being left alone.

The Bold and the Beautiful spoilers say Xander will eventually spread the word about Zoe. He’ll give Emma the news, but he won’t share Zoe’s name or a description. That’ll lead to some confusion with Emma’s new “pal” later!

Hope will also get the scoop on Xander’s stalker-ish ex. She’ll just want Zoe to steer clear of the fashion show, but that’s wishful thinking. Zoe will indeed make an appearance there, so it should make for an interesting showstopper. She’ll hog Emma’s limelight, but the surprise could work out well for Hope’s line.

Sally (Courtney Hope) will also point the finger at Zoe this week. She’ll want to smack her after Zoe’s website plot is exposed. Over with Liam (Scott Clifton, he’ll get a lecture from Brooke (Katherine Kelly Lang). She’ll push Liam to choose Hope as soon as possible. Brooke will think someone’s going to get hurt if Liam doesn’t act fast.

Of course, that’s going to happen anyway! Pain is inevitable for one of Liam’s love interests, so Bill (Don Diamont) will try to make sure it’s Steffy (Jacqueline MacInnes Wood). He’ll put a sneaky plan in motion, so stay tuned for more drama.