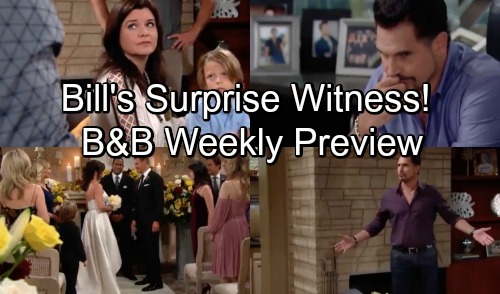 The Bold and the Beautiful (B&B) spoilers preview and new weekly promo for the week of September 24-28 tease that the custody battle will spiral out of control. The harder Thorne (Ingo Rademacher) and Katie (Heather Tom) push, the more Bill (Don Diamont) will want to fight back. He’ll do plenty of ranting over the next few episodes. Bill will be particularly infuriated by Katie and Thorne’s mad dash to the altar.

Naturally, Bill will know exactly what they’re trying to do. Katie’s hoping to give Will a new stepdad and make it seem like they’re the perfect little family. She’ll want to show that they have a stable, loving home. Katie and Thorne are counting on Judge McMullen (Joe Lando) to be impressed, but Bill certainly won’t be. He’ll fly into a rage over their attempt to influence Will (Finnegan George).

Bill may argue that they’re poisoning the boy against him. He’ll complain about how they won’t recognize his attempt to be a better father. Katie will think it’s too late, but Bill will refuse to back down. The Bold and the Beautiful spoilers say he’ll declare that Will is his son, not Thorne’s. Bill won’t stand by and watch them create a fairytale ending, especially when he’s suffering so much.

When Bill can’t convince Katie to stop the madness, he’ll deliver a fierce threat. Bill will insist that he warned her not to do this. He’ll most likely point out that she’s passed the point of no return. Katie’s crossed the line, so now she may have to pay the price. Bill will at least hope he can somehow gain the upper hand.

Katie will share her growing fears with Thorne. This isn’t her first rodeo with “Dollar Bill” Spencer, so she’ll wonder what he’s got up his sleeve. B&B spoilers say Thorne won’t be worried, but Katie will feel like disaster could be brewing. She’ll do her best to shove her concerns aside as the wedding kicks off.

Thorne and Katie’s ceremony will bring joy, but it won’t last long. The custody battle will soon rev the drama right back up. The Bold and the Beautiful spoilers say Bill will look smug and plan to call a surprise witness. Will he manage to get Liam (Scott Clifton) on his side? Could it be Steffy (Jacqueline MacInnes Wood) instead? Perhaps it’ll even be someone from a dark part of Katie’s past.

Regardless, B&B fans can expect some vicious conflict and stunning moments. We’ll give you updates as other news comes in. Stay tuned to the CBS soap and don’t forget to check CDL often for the latest Bold and the Beautiful spoilers, updates and news.