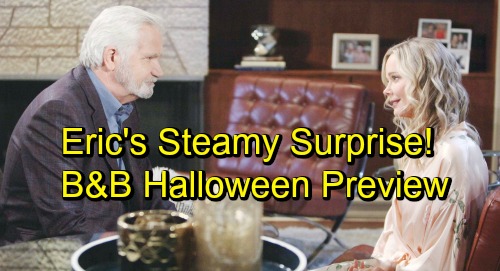 The Bold and the Beautiful (B&B) spoilers for the week of October 29-November 2 tease that we’ll see some spooky moments on the CBS soap. Halloween’s coming up, so expect some tricks and treats for many B&B characters. We’ll also see a shocker or two as several battles rage on.

First, let’s talk about Quinn (Rena Sofer) and Pam’s (Alley Mills) latest war. The longer they fight, the worse things will get in Quinn and Eric’s (John McCook) marriage. Quinn feels like she’s been walked over far too much. She’s ready to unleash a little of her dark side again and that could be awfully dangerous!

The Bold and the Beautiful spoilers say Quinn will don a witch’s costume this week. It’s fitting since her behavior’s been rather witchy lately! Quinn’s out of control, but she doesn’t seem to care. She’s been selfless for a while now, but she’s putting her foot down on this wedding.

It won’t be long until Pam and Quinn are facing off once again. Pam could get concerned as this feud heats up. She’ll call Quinn evil and fear that her engagement to Charlie (Dick Christie) will be derailed. However, you can bet Pam will fight back. If Pam can’t have peace, neither can Quinn!

Of course, Quinn’s already sabotaging her own relationship. Between being harsh with Pam and the portrait incident, Eric will be at the end of his rope. After ripping into his wife, the weary Forrester will decide to pay Thorne (Ingo Rademacher) a visit. At Katie’s (Heather Tom) house, Eric be surprised by someone familiar – and she’ll be rather scantily clad.

Donna (Jennifer Gareis) will have on some hot lingerie, so she’ll ask “Honey Bear” what he thinks. Eric will wonder what in the world’s going on. He’ll be pleased to catch up with Donna, but her attire should be pretty distracting. It turns out Katie left Donna something from the new intimates line, so she’ll happily show it off to Eric. Flaunt it if you’ve got it, Donna!

Next, the exes will share a tender chat. Uh-oh. The Bold and the Beautiful fans can see where this is going. Quinn will soon realize there’s a greater threat than Pam and the strain on her marriage. Donna’s return just might be the worst thing that could happen for “Queric.”

At the hospital, Bill (Don Diamont) will be smug over Brooke (Katherine Kelly Lang). He’ll taunt Ridge (Thorsten Kaye) about the possibility of losing her and ask if he’s nervous. Bill will argue that he’s the better man, but Ridge won’t think so. These two will resort to some ruthless tactics, but who will ultimately win Brooke’s heart? B&B viewers will be anxious to find out!