The Bold and the Beautiful Spoilers: Is Taylor Right – Did Hope and Brooke Trap Liam Into Lope Marriage? 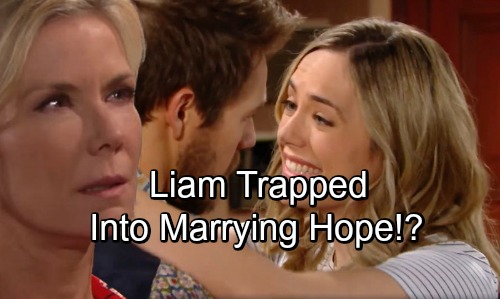 The Bold and the Beautiful spoilers tease that Hope (Annika Noelle) and Liam (Scott Clifton) will have a blissful “staycation” honeymoon. The two will revel in their love and plan for their future, and they’ll probably temporarily forget the wedding-day hiccup that occurred at their reception.

Of course, that hiccup was the cake fight between Taylor (Hunter Tylo) and Brooke (Katherine Kelly Lang). The fierce moms just couldn’t keep themselves from getting into it. The tension had been brewing for several days, and finally came to a head when Taylor lashed out at Brooke, accusing Brooke and Hope of quickly locking Liam into marriage because they know that the woman he really loves is Steffy (Jaqueline MacInnes Wood).

But is Taylor right about that? Sure, the wedding did happen with lightning-fast speed, and so did the almost-wedding that happened earlier this summer. And Brooke did counsel Hope to marry Liam as quickly as possible – both times. But Hope was really never the one to push for a quick wedding. So, if anyone, it’s Brooke who wanted to swiftly lock Liam into a marriage.

From the moment Hope decided to pursue Liam again, Brooke took it upon herself to push the two of them together. Her pushiness escalated to the point of her bashing Steffy’s character to Liam and demanding that he choose Hope.

One wonders why Brooke wanted to rush and push so much. It could be because she knows that Liam is a classic waffler and just needed some help deciding his future. Or, Taylor could be right; perhaps Brooke was afraid that Liam really loved Steffy more and wanted to seal the deal with a wedding before he had a chance to sort it all out.

All this said, it’s clearly the case that Liam loves Hope and wanted to marry her as much as she wanted to marry him. In fact, Liam seemed relieved when Steffy took herself out of the equation and chose to go her own way. Liam will always love Steffy, but he likely would have had ongoing difficulties dealing with the fact that Steffy slept with Bill (Don Diamont), no matter how much he thought he was over it.

So, where does that leave us? Yes, Brooke may have wanted to lock Liam into the marriage. But it doesn’t seem that Hope did, and it does seem that Liam (who is, after all, an adult) made the decision to marry Hope on his own. And now Liam, Hope, and Steffy are going to try to come together as a successful extended/blended family and live in peace.

What’s your take on the situation? Do you think that Liam acted freely and willingly in marrying Hope? Stay tuned to the CBS soap and don’t forget to check CDL often for the latest Bold and the Beautiful spoilers, updates, and news.