The Bold and the Beautiful Spoilers: Jacqueline MacInnes Wood Maternity Leave Update – What To Expect From Steffy

BY Olivia Marie on November 30, 2018 | Comments: one comment
Related : Soap Opera, Spoiler, Television, The Bold and the Beautiful 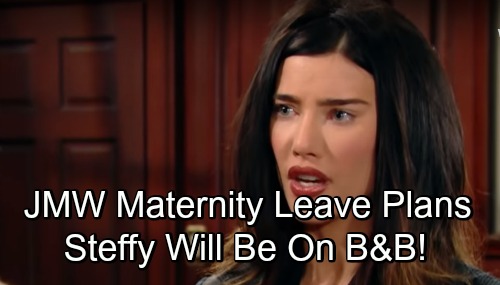 The Bold and the Beautiful (B&B) spoilers tease that Jacqueline MacInnes Wood (Steffy Forrester) may have taped a handful of scenes in preparation for her maternity leave. The actress is having a bouncing baby boy in a few months and she is already planning her 8 week maternity leave exit from the CBS soap opera.

The fans of B&B have been anxious about MacInnes maternity leave. They wondered if Steffy was going to leave when Hope (Annika Noelle) had her baby as a way to get away from Liam (Scott Clifton). The actress has been tight-lipped about her exit and teased the fans that they will have to tune in as it will be a surprising one. As it turns out, The Bold and the Beautiful is handling her exit better than Karla Mosley’s (Maya) as they plan to have JMW prepare steffy scenes for five weeks in advance of maternity leave.

What this means is Steffy may be missing from Bold and the Beautiful for only a few short weeks. The B&B writers feared the fans would be upset if Steffy wasn’t on the daytime soap for 8 weeks. They believe that taping an extra five weeks will lessen the impact of her departure.

What we know about JMW’s exit is she will be leaving around February-March 2019 when her baby is due and should return two months later. The writers plan to have her scenes pre-taped, and for the remaining three weeks, they will find a plot-related excuse for Steffy’s absence.

It sounds like the B&B writers have worked out a plan to keep Steffy on the show throughout most of her maternity leave. Are you relieved that you won’t need to jones over Steffy for two whole months? Don’t forget to come back for more Bold and the Beautiful (B&B) spoilers, news, and casting updates!