The Bold and the Beautiful Spoilers: Kelly Paternity Shocker Hits After Will Custody Defeat – Bill Loses a Son, But Gains a Daughter?

BY Kinsley Goldman on August 31, 2018 | Comments: one comment
Related : Soap Opera, Spoiler, Television, The Bold and the Beautiful 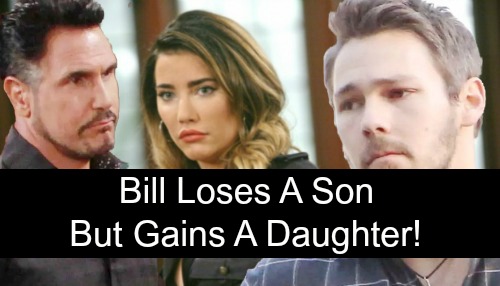 The Bold and the Beautiful (B&B) spoilers tease that Bill (Don Diamont) will deal with both rage and fear. He’ll keep tossing around threats about destroying Katie (Heather Tom), but he’ll be worried deep down. Bill really screwed up with Liam (Scott Clifton) and even Wyatt (Darin Brooks), so he wants a chance to repair the damage with Will (Finnegan George).

If Katie gets sole custody, Bill will be kept at a distance. He’ll realize Thorne (Ingo Rademacher) will inevitably make matters worse. As long as Thorne is with Katie, he’ll be the one stepping up and playing the role of dad in Will’s life. Bill will do everything in his power to fight Katie on this, but his efforts may ultimately fail. What happens if Katie indeed gets sole custody?

Bill could end up in a dark place over losing his parental rights. Brooke (Katherine Kelly Lang) would try to be there for her ex, but Bill would still struggle. However, B&B could turn things around with a huge twist. Will Bill lose a son and gain a daughter? Of course, we’re talking about Kelly. The Bold and the Beautiful could easily change the paternity of the “Steam” baby.

If Bill was involved in a switch, he probably would’ve divulged the truth by now. It would’ve been a great strategy to use when he was obsessed with Steffy (Jacqueline MacInnes Wood). Nevertheless, The Bold and the Beautiful could still take the paternity shocker route. It’d be easy to claim there was a mistake at the lab.

Kelly could develop some health issue that leads to new blood work. The doctor could discover that Liam isn’t Kelly’s father after all. If this happens just as Liam and Steffy are on the verge of a reunion, that’d be even better. The CBS soap has to keep the drama going strong!

If Bill loses his battle with Katie, that could make him more determined to raise Kelly. Bill could feel robbed of the opportunity to raise Will, so he’d undoubtedly fight for his little girl. Once the tension died down, could it revive Bill and Steffy’s spark? Despite Bill’s many flaws and ruthless behavior, there are plenty of “Still” fans out there. Perhaps B&B will give Bill and Steffy a real shot down the road.