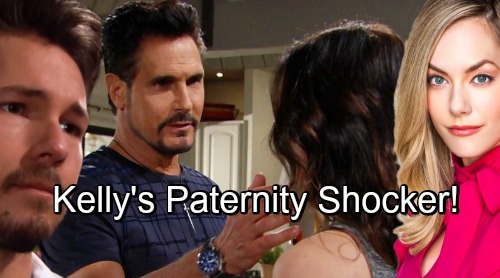 The Bold and the Beautiful spoilers tease that Liam’s (Scott Clifton) world will radically change, yet again. He, along with all affected characters will be stunned when Kelly’s paternity shifts. So, instead of Taylor (Hunter Tylo) being tagged as the eternal disruptor, an innocent child can be the center of the storm for Steam, Lope, and Still, all couples that would be put back in play.

Scott Clifton said that Liam is absolutely, positively, without any soapy question Kelly’s biological father, he also said that could change if ‘Mr Bell’ wanted it to. So, Liam is really Kelly’s father? To not put a question mark at the end of the last sentence means placing full faith into B&B’s DNA test.

And those outcomes have never been known to change on this show, or on any other daytime drama before. Well, okay, let’s explore this theory a bit more.

Bill (Don Diamont) hadn’t seen the light while Steffy (Jacqueline MacInnes Wood) was pregnant. During that time, somewhere late in her pregnancy, he arrived at the cliff house and badgered Steffy about becoming his wife. She got fed up and threw him out, slamming the front door behind him as he begrudgingly sauntered out.

Wood’s character turned, tripped and fell to the floor. Steffy’s water broke, Liam was contacted, and a rush to the hospital ensued. Thankfully, neither Kelly nor Steffy was hurt and Lope’s baby arrived early.

Dr. Phillips (Robin Givens) told Steffy and Liam that Kelly wasn’t actually born too soon, but came on schedule. Clifton and Wood offered similar reaction shots, which projected their easy acceptance of a plot point that could logically be digested.

Steam wasn’t focused on a delivery calender. Steffy and Liam were thrilled their first-born child was healthy. Nothing else mattered at that time. Steffy was still hoping for Steam’s full revival, while Liam remained noncommittal.

Don Diamont recently said that Kelly being his daughter is a great idea. Bill could easily reveal that he finagled said test results in order to help his son out. As with any faulty, full belief in a paternity test result, so too would any acceptance of Bill’s word also be misguided.

Diamont’s great character could still be withholding the truth because he doesn’t want to disrupt Liam’s life, as part of a penitence plan.

Then again, Bill might have manipulated nothing. Instead, a simple clerical error could have been made. Those happen in real life as well, so it’s plausible.

If Kelly proves to be Bill’s child the option for Still to come back then exists. Taylor will be livid, but Brooke (Katherine Kelly Lang) will sport a different reaction.

Lope’s bond will be further secured because Hope (Annika Noelle) surely conceived Liam’s child. On that point she is believed.

Kelly is linked to her real dad. Liam is actually awaiting his first child. Lope’s family drama with Steffy and Taylor evaporates and then there’s Bill, the father of a baby girl.

Just image Wood’s alter ego’s reaction, along with Ridge’s (Thorsten Kaye) if that plays out! It would be great soap and because this alternative appears to offer far more drama than current storylines, should not be disregarded as impossible.