The Bold and the Beautiful Spoilers: Liam and Wyatt Worry About Bill – Sons Get Sentimental For Thanksgiving

BY hellodrdavis on November 20, 2018 | Comments: one comment
Related : Soap Opera, Spoiler, Television, The Bold and the Beautiful 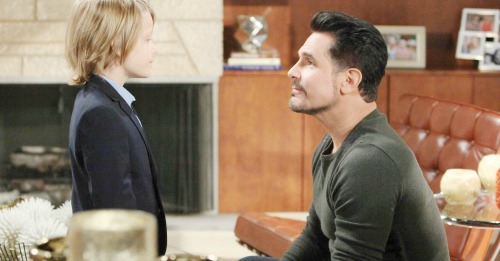 The Bold and theBeautiful spoilers tease that as usual, Thanksgiving will be a major event for the Forresters. And this year there will be some notable firsts for the family. Both Liam (Scott Clifton) and Hope (Annika Noelle) are celebrating their first Thanksgiving since getting married, and Steffy (Jacqueline MacInnes Wood) will be celebrating baby Kelly’s first holiday.

Wyatt (Darin Brooks) and Sally (Courtney Hope) will also celebrate their first Thanksgiving together as significant others, and they’ll do so at the Forrester mansion in grand style. Donna (Jennifer Gareis) will be present, too, so it will be a big group.

And we can’t forget Katie (Heather Tom) and Thorne (Ingo Rademacher), who will be celebrating their first Thanksgiving together, too. They’ll have Will (Finnegan George) in tow and will be a happy family.

But there will be someone who will probably be spending the day alone, and that’s Bill (Don Diamont). Of course, there’s a reason he’ll be alone. He’s done plenty of horrible things to his sons over the course of the year, and that naturally has led them to celebrate with others.

B&B spoilers say that Liam and Wyatt won’t be able to help but wonder about their dad and what he’s doing on what’s bound to be a lonely holiday for him. Sure, Bill will probably meet up with Will later in the day or the day after Thanksgiving for a mini celebration, but it still will have to sting that all three of his sons are celebrating with another family this year.

Will Liam and Wyatt drop by to see their dad after the festivities at the Forrester mansion? It would be a nice gesture and would probably do them all some good. It’s been quite a year for the Spencer guys, and a little bit of healing wouldn’t hurt.

Do you feel sorry for Bill for spending the holiday alone? Stay tuned to the CBS soap and don’t forget to check CDL often for the latest Bold and the Beautiful spoilers, updates, and news.